It’s Not About the Dress

My office is like your office. We were talking about The Dress on Friday. 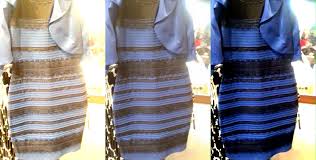 No matter how you look at it, it’s still just a dress.

No, it’s black and blue!, said another.

I shall live tweet this debate!, I declared as the resident social media manager. Don’t go looking for those tweets, though, because I quickly remembered that I had an impending deadline.

Thankfully, the debate didn’t get too heated in our corner of the world. My work group gets along well, and a designer frock won’t be the object over which our harmony will be pulled asunder. Plus, being in marketing, we’re all media-savvy folks who see the debate over the dress as what it is: a diversion from the more-important issues of the day.

For instance, The Walking Dead.

My group’s discussion of the dress probably lasted about four minutes, and I don’t think any hearts, minds, or corneas were convinced to the other side of the debate during that time. However, I’m still thinking about the dress two days later. Well, not the dress itself – no matter what color it is, I don’t think it’s particularly remarkable – but why it has become the Helen of Troy of late February 2015, tearing friendships, marriages, and office pleasantries apart in one fell swoop. People get angry over this dress and its supposed color, and you need look no further than your Facebook newsfeed to see the trail of tears it leaves in its wake.

Why do we care about this dress?

Oh, little monkey. I certainly hope you found what you were looking for.

Now, I am fully aware that the Internet loves to get obsessed. Remember a few Februaries ago when a monkey that got lost in a Canadian Ikea captured the hearts and minds of the interwebz for a few minutes? We were all transfixed by that poor little fella. Why was he lost? Why was he wearing a coat? Who takes a monkey to an Ikea? Did he chose the Ikwaften sofa or the Basmör armoire?

So many questions, so few answers.

The Dress is the new monkey. This is of course a shame because the monkey out-cutes it by about 30 million, but you get my point.

Furthermore, the Internet loves to get angry. I’d conjecture that getting angry is probably the thing that we like best out of all the things whether we’re on the Internet or not, and that’s saying something since “eating bacon” is also on the list of popular activities people engage in. Getting angry is our red-blooded, God-given, American right. We love to disagree for the sake of disagreeing, we adore writing self-righteous blog posts justifying our anger, and we just can’t get enough of picking fights on Facebook and Twitter. We need to be heard, dag nabbit, and we are going to yell yell yell and create hashtags and unfriend our contacts until that happens.

So, let’s yell about the dress. It’s as good a topic as any.

Except that it isn’t.

You see, there is a scientific reason why we see the dress differently. I will let the good folks at Slate summarize the science behind the dress:

Basically (and I cannot overstress how very generalized the following statement is, as I am about as qualified to discuss science as I am to perform brain surgery), we see the dress differently because we are different. We’re viewing the dress from different light contexts, and throw into the mix that there is not one uniform human eyeball by which the dress is beheld, then yeah, we’re going to see it differently. Here’s another article from Wired that explains this phenomena.

OK, so since there’s a scientific explanation justifying the 50 Shades of Dress, either camp can’t really yell at the other side for not seeing the dress their way. This is deeper than we thought, eh?

I’m going to digress for a sec. Bear with me.

I was once in a therapy session – yep, I go to therapy. It’s awesome. – and I was in tears telling my psychologist about something that was causing me an unbearable amount of stress at the time. It was mundane and I don’t even remember what it was now, but once I was done talking, my psychologist said something that I will never forget: “You may think that XYZ is at the root of what’s bothering you, but I don’t think it is. Dig deeper to find it.”

And he was right. Over time, I dug deeper. My angst that regularly brought me to tears wasn’t caused by any number of small things that I could easily pin it on. It wasn’t about that awful coworker. It wasn’t about the professor who seemed to intentionally make my life miserable. It wasn’t about the objects I wanted in my life but couldn’t afford. Nope, it was rooted in my larger issues of control, self-confidence, and self-worth.

My point: there’s always something bigger going on.

Perhaps this is why this whole dress ordeal is getting under my skin. As a society, I think it may be time for us all to go to therapy and figure out what’s really bothering us so badly that we need to collectively lose our shiz over some Magic Eye dress. What’s bothering us so much that we use a dress as an excuse to tear each other down? The dress doesn’t bother you? Then how about some deflated footballs?

Let’s figure out why we feel it’s OK to attack each other under the cover of social media anonymity.

Let’s ask ourselves why we’re more interested in arguing about a dress than we are in looking at the pressing social issues that are facing our communities.

Call me idealistic, but I see just a dress. Chances are, you do too. That’s a good start.

← Boundaries in Blogging
Threading the Needle →