In Praise of Glasses

In February 1995, a very important discovery was made as I rode home with my mom for dinner.

Trees have leaves. And you can see them. Like, from far away.

I had just been outfitted with my first pair of glasses and it was love. (Yeah, the “first sight” kind. Har Har.)

I didn’t need to wear them everyday and I didn’t until I went to college, but those glasses were my gateway drug to the world of what is the best accessory ever created. If they love you as much as you love them*, they will fill your life with the blessings of clear sight and that just-finished-attending-a-foreign-film look. We are smarty-pants and we are proud. Or at least we simply appreciate the idea of looking like we’ve read a book.

*And let’s face it: glasses don’t love everyone. But please allow those of us who  shouldn’t wear jeggings the small elite pleasure of wearing our glasses well. 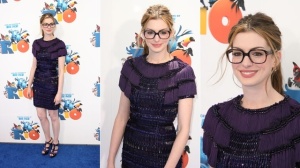 Anne, you know I love you, but NO. Source: Jezebel.com

My glasses are my constant companion. No matter how much more my eyesight deteriorates, I could never bring myself to get Lasik and eliminate the need for them in my life. I don’t really do earrings and necklaces so my glasses are my foremost accessory. And that’s fine by me because the idea of putting contacts in my eyes makes me wretch.

When I got married, I finally broke down and tried to get contacts so, you know, I could SEE and all. As much as it pains me to say it, I wasn’t sure if I wanted to include my red glasses as part of my bridal ensemble on the big day. For shame. Before the optometrist could officially dispense the Disks of Torture to me, I was required to demonstrate that I could put them in and take them out on my own. I tried, to no avail. Putting those things in my eyes just made me feel nauseous and seasick. So I went home and “practiced” for Round Two by trying to touch my eyeballs. I returned the next day and had no luck again, nearly ralphing in the garbage can. Day Three came and I was determined to show those contacts who was boss.

But yeah, I couldn’t get them in. No surprise there. My body was literally rejecting the contacts. Glasses had chosen me and I had reached the point where I couldn’t opt out of that designation. No worries; I instead purchased a pair of Vera Wang frames that I wore to the reception on my big day. It is my thought that every lady should don something Vera Wang for her wedding day, and I would highly suggest glasses if a dress costing the same as a Miata is not in the budget. 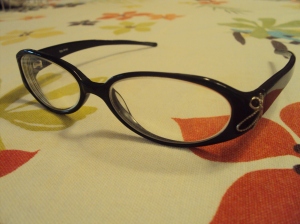 It kills me when the Stacy Londons of the world accuse those among us who wear glasses as “hiding” behind our big clonky frames. Sometimes we just need the safety that big clonky frames can give us. And I mean “safety” in a very literal sense. Half the time Adam Savage doesn’t even put on goggles when he dips his hand in boiling lead on Mythbusters because he’s already wearing his giant military-esque glasses. I suppose you could make a claim that stilettos could also be wielded in such a way to actually protect your body in a pinch, but that’s a bit of a stretch. “Fierce” is a word misappropriated by the most vulnerable sitting duck fashionistas among us. In the real world, it’s a giant pair of glasses – not a pair of Christian Louboutins – that are going to keep the weirdos from approaching you on the subway. They are so afraid that you’ll insist that they attend a poetry slam with you or have to listen to your diatribe against the Establishment that they keep their distance.

When the baby arrives in a couple or so weeks, she won’t be able to see anything for awhile. Babies’ eyesight is really poor at the beginning of their lives and they can only really see maybe eight inches. But that’s OK. Once she ages a bit, I can’t wait to schlepp her to the optometrist and get an assessment of her eyesight.

Because, you know, babies with glasses way out-cute all other babies. Is it wrong that I want my baby to be as blind as me?

I dare you to say that’s not adorable. Source: neatorama.com

I didn’t think so.

← Bullets In My Head
I Shouldn’t Have to Tell You This. →