Tales of the World: Just Ask

When you are in school, teachers always tell you that there are no dumb questions, which is true to an extent. It’s not dumb to ask when the test is, how many moons Jupiter has, or what the difference between an alligator and a crocodile is. It is, however, dumb to ask what the capital of Africa is.

I am overcoming a lifelong timidity towards asking for things. Unfortunately, I feel like a lot of the questions I ask are dumb and not worthwhile. I’m getting over it, but I want Miss C to seldom feel self conscious when she raises a question or asks for something. I promise to raise a child who is well enough equipped with basic information to not have to ask how many arms an octopus has if the world also promises to listen to her when she questions it. I want her to know that even if she gets turned down for a request, she was not dumb to ask. I want her to know that I am willing to surprise her when she asks me if she can have permission to do things. B and I likely won’t let her get her ears pierced before she’s 12 or stay out past eleven when she’s 16, but we will probably say yes to things that she expects us to shoot down. You’ve gotta keep your kids on their toes and surprise them with your coolness occasionally.

When I was a teenager, I was obsessed with the Smashing Pumpkins. My entire life was built around them. Most of my money went towards buying European b-side releases and tradeshow posters of them. I LOVED them, and I still do. 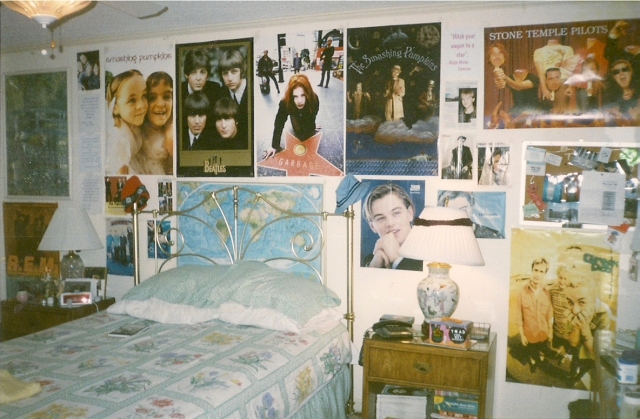 This picture of my room when I was a teenager doesn’t really have anything to do with this post, but it is pretty hilarious, so I thought I would tack it in.

In 1995, Mellon Collie and the Infinite Sadness was released. I hate to say it was epic, but check the definition. Over two hours long, it was actually epic. I asked my parents if I could go to the concert when the Pumpkins’ tour visited Memphis. The concert was on a school night, so I expected a no. I expected correctly. My plea was vetoed. This turned out OK because Billy Corgan allegedly ended the concert early because he was angry and a rockstar and he did stuff like that, apparently.

1998 rolls around. I was then 16, highly motivated, and more in love with the Pumpkins than ever. I checked their touring schedule on this thing called the Internet that we had in our house, which, incidentally, was created for the sole purpose of uploading and printing pictures of Billy Corgan for free. This time around, the Smashing Pumpkins would not be touring in Memphis but they would be making a stop in Nashville, which was about a three hour drive away.

I fully expected to get a big fat no again when I asked my parents if they would let me go. In addition to going to the concert which, let’s face it, THEY would buy my ticket for, they’d also have to drive me there and get a hotel room for the night. My parents weren’t fuddy duddies, but there’s only so much you can expect of people who often spoke of their love of the Carpenters back in the 70s.

But I asked. I just asked.

And my mom said yes.

I was really shocked when she agreed to take me and Besfrinn Cameron, but I didn’t question it. She bought our tickets – that’s right, our tickets; she attended the show with us because she’s that surprisingly cool – drove us there, and put all three of us up in a hotel for the night. All because I had the nerve to ask. She sat next to Cameron and me as we screamed every lyric, as we laughed at every droll joke James Iha made between songs, and humored us as we gushed about the show.

Me and Cameron pre-show. We were so cool. 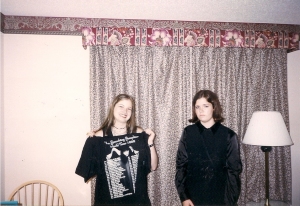 Aaaand post-show. Apparently, I had just received news that all the kittehs just died.

She said no to many more of my schemes over the years, but occasionally she said yes to the things that meant a lot to me. The lesson for Miss C is twofold: 1, parents are cooler than you will I’ve them credit for, and 2, asking is worth it.

I’m making it a priority to raise C with the knowledge that she can ask. Even though we won’t always say yes or give her the answer she wants, we won’t ever laugh at her questions or make light of them. Doing so is finding that balance in parenthood where, even though you’re not the child’s friend, you are her ally and her guide. 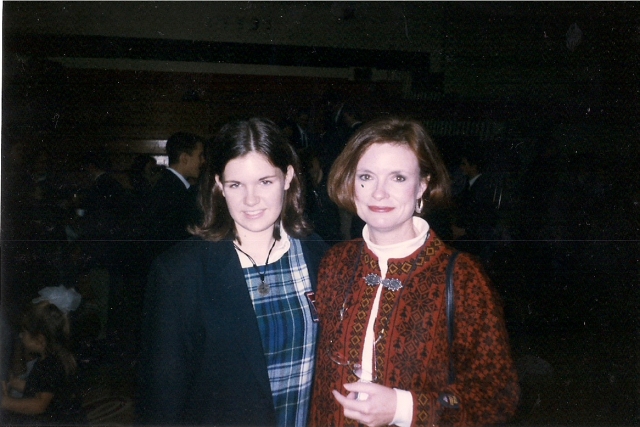 My ally. My mom. She put up with me as a teenager so she wins.