A Hundred Amtrak Trips All Squashed Into 600 Words

In a car parked behind a now-defunct bookstore, I tell B that he is alright and all, but I’ll be leaving Memphis next year to go to school in Chicago, leaving him behind to finish his last year at CBU without me. He tears up and bites his tongue. He doesn’t care that he is showing me he’s sad; he’s as real as they come and doesn’t waste pretenses on me. 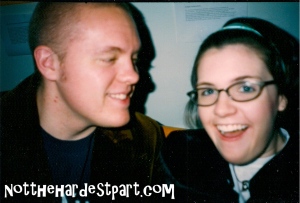 Vintage Murooned and Waiting, circa 2003

He packs up my U-Haul filled with estate sale furniture and file folders crammed with my undergrad thesis (I might need it?) and drives me to Chicago. After five days and a couple dozen Matt’s cookies, he books a one-way ticket on the City of New Orleans to go home. The train is scheduled to leave Union Station at 8PM and arrive back in Memphis at 6:15AM the next morning, and I say nine thousand times how won-derful it is that he doesn’t waste any time traveling.

The Great Hall in Union Station is one of those places that is wonderfully arrogant. It has the audacity to make moments that should remain small, big. It is hard to do anything in there without wondering if some nonexistent camera is catching you on your good side. During my stint as a Chicagoan, I eat probably 150 Chicken McNuggets on those benches and feel like I am making some kind of bold, urban statement.

Chicago Union Station Great Hall (It seems like I should put a comma somewhere in that description.)

I drop B off at the station and leave him in the Amtrak terminal he’ll be departing from. I ride the El back to the Loyola stop, fighting tears the entire time, resenting my tragic, romantic choice to move to Chicago. I am  a crier and damn that damn Great Hall for making the damn drama linger as I ride the Red and Blue lines back to my university hovel.

I get up early one Saturday morning and put on a black a-line skirt, a black turtleneck, black shoes, and a tan “vintage” (read: gross) Member’s Only jacket.

I disembark at Clinton and walk up the quiet weekend streets rehearsing the moment I see B across the Hall and we run towards each other and embrace and the sky opens up. Upon entrance, I see him with his duffel bag half his own weight and my heart explodes all over my outfit. I’m grateful that we are standing in a room that can contain the moment and do it justice. We go to Lou Mitchell’s for breakfast and look at each other across the booth.

I accidentally book his return trip a day late.

B hails us a cab in front of our apartment at Clark and Granville. A suitable one stops and he manages to cram my luggage and the garment bag containing my wedding dress into the trunk. I feel like I should be fussier about the placement of my dress, but then I remember that if I were really fastidious, I would have chosen to fly rather than travel on the City of New Orleans. It’s just a dress. B will meet me in Memphis four days later after he finishes his Masters exams.

For now, though, I’ll be taking a sleeper car with my dress and my slipshod trousseau home for our wedding. I hang the dress from a hook in my car and put my veil on while I read Dracula as a I fall asleep, wasting no time traveling overnight.