There are roughly 32,863,021 essays that have been written about the bodies we get stuck with after we have kids. Mine isn’t going to be any better and I’m likely not going to say anything that sheds light on the subject of why I think that as a mom I have to look a certain way, but I am going to talk about where I am right now as I hang out in a body that is mine when I like it and not mine when I don’t. Hang tight.

When we lived in Chicago, B and I worked in the afternoons and evenings so we would hit the gym first thing in the morning. I would start my workouts by getting on the treadmill, setting it to the steepest incline, and watching Oprah on the gym TVs. I don’t remember anything Oprah ever said*, but I do remember these Suave commercials that would come on. They showed a series of images of a woman getting married, being pregnant, having a baby, and then holding a screaming two-year-old. By the end, the woman looked rundown and haggard. But fret not! Suave then enters her life and she is once again as exuberant and beaming as she was on her wedding day. Because that’s reasonable.

*This is probably good because then I’d feel bad that I don’t remember the opening prologue to the Canterbury Tales but I do remember something vapid and empty a talk show host said. I am an equal-opportunity forgetter.

I buy that stuff and eat it up. I don’t blame Suave for creating some ridiculous image of the merits of their shampoo. That shiz is cheap. It only costs like a dollar and some cents, so if you’re really disappointed when it doesn’t deliver, then you need to take a second and look at the price tag and realize that nothing that inexpensive is going to revamp your entire image. But I can pay $1.72 for an idea. Cheap me will fork it over. I buy it and convince myself that I’m treating myself and recreating the pre-baby me because the lady in the commercial was shiny.

I spotted my first gray hair when I was 26 and since then, word has spread on my scalp that gray has a home there. For awhile I was just plucking the thick wiry strands out with tweezers, but that eventually became as ridiculous as it sounds. So now, in addition to my lux Suave regimen, I also dye my roots every six weeks with a box of Garnier. Every time my husband sees that I have brought home another kit, he looks at me and tells me with a great deal of sincerity that I’m perfect as I am and I do not need it. I believe his sincerity and know that his words are true to him, but I still feel like I should be doing something. We don’t own our home, but I will occasionally call maintenance and have them fix something small. I can call maintenance on my hair too. I should probably take a bit more ownership of myself, as I’m not an apartment. I’m stuck with me.

I use the Garnier and the Suave because it’s inexpensive and it helps me fix myself up. The real issue is my weight. I put on fifty pounds during my pregnancy and have still not gotten rid of all of it. I’ve gone down two sizes since I had Cee, and I’m glad for it, but still my bod is not the same. I’ve heard a bajillion times from women who have gotten back to their pre-baby weight that even with that magic number reappearing on the scale, everything has shifted. Their bodies are like continents; they still contain the same amount of land mass, but instead of everything being spread out nicely, they are more like a Pangaea where everything’s all clustered up together and awkward. I’m not deluded into believing that I’ll ever be 20 again; you can’t grow a human inside of you and expect to be the same husk of a person that you were before. This is neither good nor bad. It’s just the way it is.

But I still hang onto that frustration that I’m aging. I’m not frustrated that I have fewer years left in my lifespan or that my hair is only as good as the last afterhours dye job I performed. I’m not frustrated that I’ve drunk so much coffee since Cee was born that I bought a box of Whitestrips, even though my teeth were never that white to begin with. These things don’t bother me. They are what they are, and if anything it’s nice to have another excuse to go to Target and buy things that make me feel like I fit in with some extrapolated version of Momhood.

What I am frustrated with is that I often look at my body through a before and after lens. I don’t trust my inclination to blame my less-than-stellar physique and hair on the fact that I’m now a mom. Those of you who have been around for awhile may remember that before Wee Cee was born, I was so afraid of this blog becoming a so-called “mommy blog”. This is basically because I viewed things touched by kids and parenting as less-than. It seemed too easy to just write about the kid all the time at the exclusion of everything else. And at the time, I wasn’t a mom, so there really was no way that I could have sincerely chronicled the trials of being a parent. But as I became a mom, this blog became a place where those issues became my issues. Imagine that: it took me becoming a parent to be able to write about parenthood.

Things changed in my life, and because of those changes, I like writing about parenthood and I don’t feel bad if someone categorizes me as a mommy blogger. But while I’ll embrace the change in my writing that motherhood brought, I cannot nearly as readily embrace the body that motherhood brought or blame the concept of “motherhood” for making me look the way I do. That just seems too easy, for me at least. I’m very reluctant to admit that it’s not a coincidence that my appearance changed a lot over the year that I was pregnant. I can’t really explain that reluctance. Maybe it’s a control issue. After all, whenever someone points out a mistake I make, my go-to response is usually, “Oh that? Yeah, I TOTALLY meant to do that.” Yeah, I totally meant to gain a bunch of weight and go six months without a haircut.

I guess I just don’t want my body issues (which are as old as me) to be reduced to a progression of images in a Suave commercial. That lady got run down as a result of her kids, but I just want to believe that I’m better than A) having my motherhood define my body, and B) taking to heart a commercial I saw five years ago when I had no conception of the life I’d eventually have.

Writing one cathartic blog post is not going to resolve my body issues, but I guess it’s a start. I have already turned off the TV. 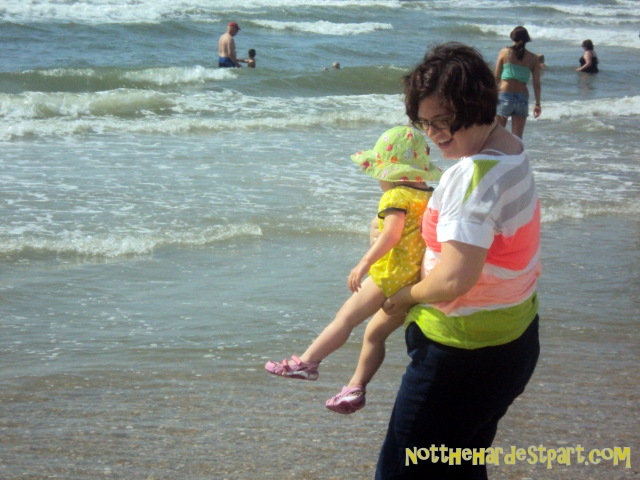 ← Remember That Time…you spent the night?
Step One to Beating the Childhood Doldrums: Summon the Dead →