Anatomy of a Tantrum

So then there was that time that my daughter went from being a remarkably-pleasant-to-be-around toddler to a rabid feral cat who dines on dynamite and plutonium, all in the course of two days. This post is about that.

2013 was a good year for us. Cee had her first birthday, discovered her likes and dislikes, continued sleeping like a saint, and ate basically whatever was put in front of her with gusto. On January 1, 2014, all that came to a close, for on that day, my daughter had her first knock-down, drag-out, soul-crushing tantrum. My husband was there so there are witnesses other than me to The Change. Year Three of motherhood should be fun. 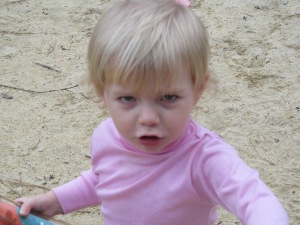 The duckface that ate my soul

Does it matter what triggers these things? To the uninitiated, yes. One would think that isolating the variable that sets the explosions off would discontinue them. Does your child cry tears of blood when you make her wear a turtleneck? Does she start convulsing when you suggest that she drink milk with dinner rather than juice? Logic dictates that you pick your battles and avoid these landmines of discontent, both for your own sanity and that of the immediate populace within earshot of your spawn.

The idea that you’re applying logic to a toddler is just so, so adorable.

Any and everything is a trigger. Yesterday I was making tacos for my family because I am awesome, and Wee Cee decided to take a break from putting pennies in her mouth and come into the kitchen and swipe a bag of tortillas off the counter. I sweetly requested that she place the circles of Mexican deliciousness back, but instead she ran into her room, jumped onto her bed, and threw them across the room. I then notified her that a one-minute timeout was about to happen. She responded as if I had sentenced her to life in Guantanamo. There was weeping and moaning and gnashing of teeth, not to mention the return of the patented Toddler Body Lock™.

This is putting it mildly.

We can be sitting on the sofa together reading her book of nursery rhymes, and then halfway through “Polly Put the Kettle On”, she will make the executive decision that Sukey will most certainly not be taking it off again and how dare I have the audacity to read to her when we have a perfectly good TV set sitting there as cold and silent as my heart? Within the space of 20 seconds, she will be laughing along with “Hey Diddle Diddle” and then weeping and screaming at the top of her lungs and scrunching up her little face. It’s a special time.

On the go? Not to worry! Tantrums also come in travel size for busy days when I have neglected to budget time in for her expression of feelings. Sometimes we’ll be driving on the freeway and I won’t cross over four lanes of traffic for the express purpose of assisting her in the removal of her socks and shoes. My refusal to do so certainly warrants her slamming her beloved Purple Bunny against the window, ripping her favorite book apart, and screeching at a pitch that is comparable to a symphony of nails being pulled down a chalkboard.

Once we get to the Good Grocery Store – you know, the one that has a Starbucks in the foyer and charges 30% more for milk, eggs, and bread but that’s ok because they also give away free cookies and cheese samples which might be used to appease the sleeping giant – she slides right into the cart with the promise that if she sits quietly for the duration of our visit, she will get an undiluted sippy of juice and a graham cracker once we’re through. I am on top of things, I lie to myself. But then, halfway through the apple section, the demon is awakened because I will not allow her to inspect the density of every honeycrisp, gala, red delicious, fuji, cameo, and granny smith on display. Her father, who is next door getting a haircut, reportedly hears her through the 12-inch cinderblock wall. I hear the death rattle of my youth.

The best thing you can do when your kid has a tantrum in public is forget every blog post and piece of advice from so-called parenting “experts” that tells you how to handle it. The only thing you can really do is what your kid dictates. Just buy some damn time. You may find it a little difficult to pry the child from the shopping cart once his or her patented Toddler Body Lock™ system has been initiated, but at least once your child ceases crying, 80% fewer shoppers will be giving you the stink eye. Let’s all just admit for a second that a large portion of our happiness relies on us not being called out on our faulty parenting by strangers buying pita chips in fancy supermarkets.

So rather than closing by asking you for advice on how I should handle my almost-two-year-old’s outbursts, I now invite you to scream at the top of your lungs until you get whatever it is that you want. For me, that will be lemon and popcorn Jelly Bellies to be eaten at the top of the Eiffel Tower on Christmas Eve with Tina Fey keeping me company. Let’s all just let out that primal yell until we get what we want and deserve, as it certainly seems to be working well for our offspring.

I’m linking up with Meredith at Perfection Pending this week!

← The Waiting, It Turns Out, Is Indeed the Hardest Part
When the Glove Doesn’t Fit →