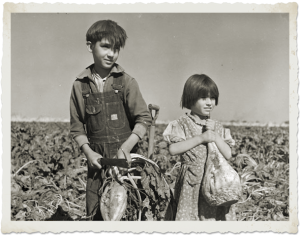 There was a time in our history when big families were the norm, when children were contributors to their parents’ coffers and not the yogurt-tube-slurping freeloaders they are today. Parents pumped out a new kid every year not out of any express religious obligation or even because they preferred the pitter patter of tiny feet to the sound of their own peaceful solitude. They did it because they needed an extra set of hands. Highly orchestrated playdates complete with Bento-boxed treats and intentional self-actualization time were still just a glimmer in the eye of the great, great grandmother of the most pinterested Type A mom of today. Kids were pint-sized contributors to the family economy, and they were given life for one purpose.

There were fields to be plowed, hems to be mended, and new babies to be raised, and the best workforce to carry out these chores was none other than the family’s underaged minions. Piano lessons, miano schmessons: that outhouse isn’t going to clean itself, kiddo.

We are a fairly pragmatic crew over here, or at least that’s how I feel when I see kids around C’s age that have been given their own miniature cars to drive around their driveways. My two-year-old does not own a car, nor will she until she can pony up and foot the bill for it. Call me old fashioned.

But every once in awhile it occurs to me I have absolutely no business looking down on parents who give their kids what I deem extravagant toys. While my child does not have a mini Mini Cooper, she is teetering on the edge of her second birthday with the knowledge of how to operate an iPad. An iPad, you guys. The same iPad that B and I marveled over like yokels who had never seen a big-city skyline when we first got it. She has mastered gestures for it that we can only dream of somehow performing with our giant sausage fingers.

This kid needs to be taken down a few pegs, methinks. You can only get so far in life with the skills acquired while playing the Elmo’s ABCs Lite.

I decided to take a page from my ancestors last week and start putting this child to work so she doesn’t get too soft on me. As I sat on the toilet with my usual audience, I looked over and saw that the toilet roll was empty and someone (ahemcoughMYHUSBAND) had not replaced it with a new roll. The cabinet across the bathroom where we keep the extra rolls was child locked, so unless I wanted to risk getting up and having my own pee dribble down my leg, I was going to have to recruit my assistant to go get me more TP from the other bathroom closest to her room. This would be fun.

“OK, C, I need you to go to the bathroom in your room and get me more toilet paper off the roll. You will have to walk in there, get the paper, and bring it back to me while I stay here. Do you think you can do it?”

The answer to that last question was as loaded to me as it was to her. Toddlers aren’t really known for their follow-through.

The wheels in her brain were turning as she set off on her mission, her expression reflective of the gravity she approached her task with. She marched out of the bathroom buck naked (she was about to take a bath), and I could hear her clear the apartment and open the door to the other bathroom.

But she was back ten seconds later with no toilet paper.

“Did you forget to get me some TP?”

Disappointed, I dripped dry and resigned myself to the fact that I am raising a thoroughly modern, useless child.

But then, as we brushed her teeth in her bathroom later that evening, I noticed that the roll was empty. She had tried to get me some TP but there was none to be gotten. My child had not failed me, and there is hope for her generation yet.

Maybe I should plant a garden so she can till it.

Make way for the road crew.

Leave a Reply to A Morning Grouch Cancel reply