Things are not always hard.

But sometimes they are.

Sometimes, your child will dangle her newly-acquired red bandana out the open window of your moving car. At three and a half, she has just acquired the ability to reach the button that opens and closes the window. And yeah, you could lock it, but this time you didn’t. She wants to see the red bandana flap in the breeze. This concept of wind and energy and risk and danger is new to her.

You’ll tell her to stop, to pull her new red bandana in. You’ll tell her that the wind will catch it whether she wants it to or not, and that when that happens you won’t go back for it.

Sometimes that will happen and your child will keep waving her bandana out the window anyway. Of course she will.

You’ll glance at your rearview mirror at the exact moment that the wind catches the bandana. The motion is fast and cruel, just like you knew it would be, and the wind will toss it into rush hour traffic. Your entire body locks because you know what’s coming.

Chaos and tantrums will ensue, especially when you make good on your promise not to go back for it. These are the tantrums you thought would be gone by the time she got to be three and a half, but have only become louder and more painful. The car will fill with screams and yells and you’ll question your decision to have ever had children in the first place. Not because you blame your kid – she’s only THREE after all, and this is how she copes – but because life is hard and tiring and complicated enough without unexpected car window bandana tantrums.

Sometimes this will happen. You’ll want to fly away like the red bandana, to let the wind catch you and just throw you away to a place where no one will ever come looking for you.

But you won’t. Just remember, you won’t. The tantrum will pass, and you’ll somehow remember that the lies depression tells you aren’t true. You’ll remember the kindness you showed yourself when you hated yourself most was an utterance of the Divine. 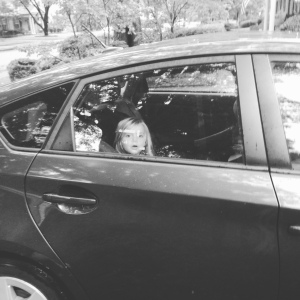