These are a few of my favorite memes

You don't feel so bad when you wear curtain clothes, duh.

When Maria took those old curtains and whipped them up into new playclothes for the Von Trapp children, she took some random material and made them into something hilarious and borderline offensive. By getting inspired by the ugliness that surrounded her and duplicating it at least seven times, she was one of the original meme generators. 4chan had nothing on her. Except for Allison Harvard. And that’s a good thing because mixing Julie Andrews with Creepy Chan is like drinking orange juice right after you brush your teeth. TO BE AVOIDED.

As a Christmas gift to you, here’s a little collection of the Internet memes that I love. Some oldies, some newbies. All awesome. Enjoy!

I chose not to post my favorite Geddan video here because YouTube has unfortunately disabled the audio (because, you know, the people making Geddan videos are only in it for the big bucks) and you simply can’t have Geddan without the original music. But this one is pretty good, too. I really hope the drug rehab ad comes up when you watch it like it did for me. You can’t make this stuff up.

It’s really because of Joseph Ducreux image macros that I was excited to make this post. Translating rap lyrics into archaic language and plastering them all over self-portraits of Joseph Ducreux in b-boy posture is the recipe for post-graduate perfection. 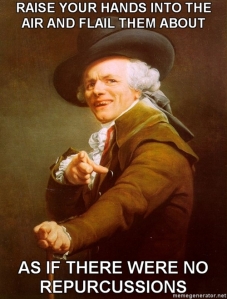 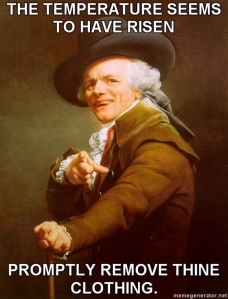 I’m just going to be honest and say that I like these memes because I’m starting to realize that I’m not in college anymore and it makes me sad. Hipster memes make me feel like I’m still with it. I want to be young and cool and speak the language of the youth.

Alright, so it may not technically be a meme because there aren’t a bunch of versions of it. It may not even be viral because it doesn’t have a bajillion views. HOWEVER I love it and this is my post and I love Das Racist and I love the Internet so meh.

Mind-numbing and amazing! Pop Tarts and cats! Pixelization! Merry Christmas to you!

I was going to do like five more memes but it turns out that blogging from my mom’s house on Christmas Eve is not conducive to my being humorous.

Have a happy Christmas and enjoy the lack of spam you’ll be getting from me for one more whole week!