I miss my apartment in Rogers Park at the corner of Sheridan and Pratt. The walls in the hallways of the building were purple and one time there was a guy passed out in the hallway in front of my door. I got mad at B who left first that morning for not warning me about him. I miss hearing Fresh Air for the first time in that apartment. There was an interview with John Waters about his Christmas album.

I miss eating Chicken McNuggets on the benches in Union Station while waiting for my Amtrack train to Memphis. I miss meeting B there at 8:40 in the morning when his train arrived. It was like a movie; we’d see each other from opposite ends of the great hall and then kind of pick up the pace to meet one another. Then we’d go to Lou Mitchell’s for breakfast and play footsy. 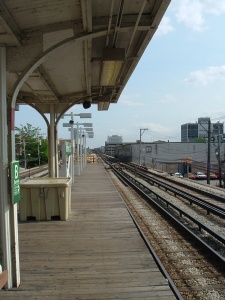 I miss the El. I would often take the Red Line from Loyola to the Chicago stop and then just walk up the Magnificent Mile to the Art Institute, which at that time was pay what you can. I felt classy getting off at Chicago because there were some colorful tiles on the walls of the subway. I loved the way the train slowed down and lurched around the Sheridan stop. I always felt like something must be wrong at first but there never really was, not there at least. I miss the heat lamps that you could turn on to stay warm on the platforms during the winter. They were awesome because they actually heated you up.

I miss Chinatown on my 22nd birthday. I have never felt so cold in my life. B and I took the train to Chinatown that Sunday. It was completely sunny with no cloud cover to lock any remaining heat in. It registered 2 degrees Fahrenheit but it was also very windy. We were the only people out and we ducked into each shop, all selling the exact same sets of chopsticks and bamboo plants. Then we ate at the Three Happiness Restaurant (or was it six?) That night we went home and ordered a pizza from Giordano’s because that seemed like the thing you were supposed to do in Chicago on your birthday.

I miss the Newberry Library book sale. I liked imagining where the books and tapes we bought came from. A bungalow in Hyde Park? A brownstone in Lincoln Park? We would each bring $30 in with us and leave with close to 45 books apiece. It wouldn’t matter if the books we bought ended up being crappy because we only spent like $0.60 on them anyway.

I miss brunch in Boys Town. And dinner in Andersonville. Once we had the same waiter at two completely separate restaurants on the opposite ends of town within the space of a week. He didn’t seem too impressed when I pointed out how coincidental this was and how amazing truffle fries are.

I miss the second apartment. When we saw it for the first time, the previous tenant who was still living there told us that it was a lucky apartment. Looking back, that seems like a pretty hokey thing to say but I didn’t think so at the time. It seemed 100% plausible that the place could be lucky. I moved in two weeks later.

I miss working in Evanston. I miss walking through the residential neighborhoods on Hinman to the restaurant where I worked. One time, I was walking on Hinman around 2:30 on Saturday. I walked passed a building with some condos. There was a couple lying on the front drive way, completely naked and doing The Do. It was one of the most bizarre things I have ever witnessed. I looked around to see if anyone else saw it. I was the only one around. I still kind of think it may have been a mirage or something.

I miss the restaurant culture. I never went to Alinea, but I knew enough people who had either worked there or eaten there that I felt like I pretty much got the gist of the place without having to spend my month’s salary to experience it myself.

I miss who I was when I lived in Chicago. I arrived a 21-year-old student who had never really lived on her own and I left a 26-year-old married woman eager to see the world. I love that city so much.

And I hate to admit it, but that Sufan Stevens song makes me tear up a little.