See how miserable she looks? Source

Remember that show “Everybody Loves Raymond”? In it, Ray Barrone lives in Queens across the street from his overbearing mother (Marie) and grizzled father (Frank) and has to deal with constant clashes between them and his wife Debra, played by Patricia Heaton. I can no longer watch this show because it stresses me out beyond belief. My viewership was one of the casualties of getting married and having a child myself.

I assume that the big idea behind her constantly-bedraggled character is that she is no June Cleaver or even Clair Huxtable, for that matter. The life of a stay-at-home mom is challenging, and it’s made even more challenging when you marry into crazy and crazy lives across the street. But she frustrates me because in the multiple seasons that the show was on the air, she adamantly tries to “fix” her husband and her mother-in-law. Inevitably, her plans to cut the cord between them never ever work, and she just ends up yelling and clenching her jaw by the end of the episode. Give it up, lady. This is the hand you were dealt when you decided to marry an eternal man-child.

My life is not Debra’s, though. Here’s how:

Did you know that Ray and Debra have three – count ’em – THREE kids, two of which are twin boys? Where the heck are they? They are brought out whenever there is a back-to-school episode but that’s about it. They aren’t even usually around for Christmas or Thanksgiving episodes. Since her kids are never around, I cannot understand why Debra is always so stressed out. I guess she’s too busy hating Marie that she forgot they existed.

I complain about my apartment a lot, and I’ve gone on the record saying that the idea of owning a home isn’t totally reprehensible to me. However, Debra does a great job of keeping my head level about the advantages of living in an apartment. Despite the fact that sightings of her kids are as rare as the Loch Ness monster, that place is too big for her to keep it neat. The proliferation of bric-a-brac is worse that at the Salvation Army thrift store. At least our several rooms are manageable. 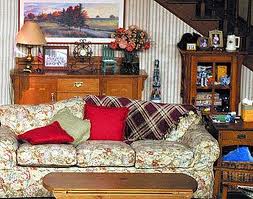 That first pillow on the sofa passed out in horror when it saw the Barones bring in a snazzy Thomas Kincaid print. Source

3. I get along with in-laws and they are not insane.

Even if I did live across the street from my mother-in-law Sidney, I wouldn’t lose my mind. Sidney is one of my favorite people ever. She has always seen me as my own person, not as B’s girlfriend/fiancee/wife. She got to know me from the beginning, and as far as I can tell, never felt like I took her son away from her. And she loves to spend time with Miss C. That’s another thing I never really got about ELR; the grandparents are more preoccupied with their middle-aged sons than their grandchildren. Weirdness.

There is an episode that stands out vividly in my mind where Debra takes a little time out to do some cathartic crying. Marie sees her doing this and freaks out because she thinks there is something really, really wrong. Debra explains that it just feels good to cry sometimes.

I am occasionally a crier too. Sometimes it just feels good to weep about nothing and everything at the same time. I did it a lot when Miss C had just come home. But I also have a blog, AKA a hobby. Maybe if Debra got herself a blog or another hobby she wouldn’t be so dead-set on the fruitless task of making her husband behave like, oh I don’t know, an adult.

Guess who doesn’t love Raymond. Ding-ding, it’s me. The central positive relationships in his life are with his dopey brother and his mother. His wife does not get the best parts of him, and when they do have a conversation it’s about his jacked-up family. I can’t help but wonder if Ray and Debra will both look back on their lives when they’re old and cherish the years when their kids were young. Probably not. By then their own kids will be living across the street from them, and they will be busying themselves with ruining their lives too.

So, this post written by Bea Magazine was just Freshly Pressed. I guess I’m not the only one who’s recently been hot and bothered by Patricia Heaton! It further discusses the multiplicity of Patricia Heaton the woman and the characters she depicts. I recommend it.