The Other Side: Notes on the Fifth Month

Full disclosure: this is the first The Other Side post that I have been truly giddy to share. Miss C is on fire, y’all. She is doing so much stuff that I can’t even handle it. Everyday is packed with new and fun things with her, so let’s get down to it.

First, the faces. With age comes the ability to be more expressive and to explore the ways she can contort her little mug. She likes to stretch her face around and clamp down her jaw a lot (especially when her gums are swollen). One of her more hilarious faces is the one we have dubbed “the Serious Cat” because it is reminiscent of the LOLcats picture: 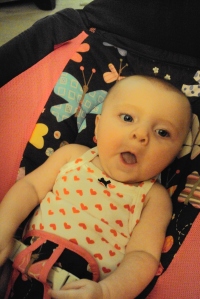 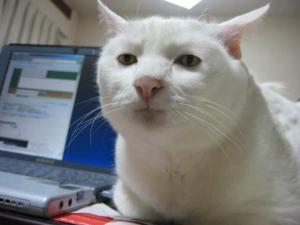 …I know, it’s not an exact match, but just allow us to dork-out about our baby. She also sometimes looks like Winston Churchill when she sleeps: 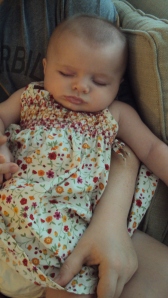 “We have nothing to fear but fear itself.”

Her coordination is really developing as well. She has taken to holding the bottle once she’s gotten enough of it to fill her stomach. It’s her hobby. She also really likes to grab at my hair and my glasses, which would be annoying if she hadn’t complete endeared herself to me with every little thing she does. She likes to open and close her hands when she explores the world around her. Seeing her do this is just one of those things that inexplicably melts my heart. Her little inquisitive movements are just so precious and contented.

And her feet. Oh my, her feet. She grabs at them with her hands and chews on them. B thinks it’s funny/gross that she sucks on her toes, but I like to remind him that since she’s not walking, it’s actually way less disgusting for her to chew on her feet than it is for her to do the same thing with her hands.

She is officially a roller! She rolled over by herself when she was about sixteen weeks, but then we didn’t get any repeat performances for about 2 1/2 weeks. Then all of a sudden, everything just clicked for her. And she rolled. And rolled. And rolled. And why stop? She loves her new mobility, and now it’s time to start baby-proofing the apartment because she won’t be slowing down any time soon. Or ever. She can’t yet sit up all by herself without the Bumbo seat, but she does love for us to hold her up by her arms so she can stand. She’s really good at locking her knees and “supporting” herself.

OK, what else, what else? OH! OH EM GEE I swear she said “mama” a week ago. It was likely just her getting upset and saying “ma” twice in a row, but it was still the sweetest sound I have ever heard. Ever. She was playing in her playpen with me next to her in a chair, and I left for a second to go to the bathroom. She got upset because she didn’t know where I was, and that’s when she said it. Again, likely not a bona fide “mama” utterance because she won’t be truly verbal for some time, but I’ll take what I can get.

She’s not a huge fan of Go, Dog, Go! yet, but if she’s anything like me it’ll grow on her because I am obsessed with it.

She is becoming quite a child of the world with her “hobbies” and traveling. She really enjoys reading books with me; it’s part of her bedtime routine but we also read throughout the day.

Does she have favorite book? Erm, maybe? We’ve mostly been cycling through books I loved as a kid so she can be able to emulate my greatness, so that means lots of Dr. Seuss and PD Eastman books. Hop On Pop is waaaaaay more hilarious than I remember it. To date, her most exciting outings are to the library. Last time she went I thought she was going to lose it. She was shrieking with glee the entire time we were there. She also likes the park and usually falls asleep when I wheel her in her stroller over the gravel. She attended her very first birthday party this past month of her friend* A, who turned one. Still not a huge fan of taking her to the store. Mama’s got to have her private time with her lover, Target. B stays with her at home when I go and get the shopping done.

*It always cracks me up when people say their babies are “friends.” Yeah, more like I’m friends with A’s mom. C likely doesn’t even know A exists.

All dolled up for A’s first birthday

Things are not easy all the time, but the overwhelming consensus of the family can be neatly summarized with a question B asks me daily now:

“Is it just me or is she the most awesome, happiest baby, ever?”

It’s not just him. Miss C is a treasure. Every day I look at this child we created and I swell with pride and love.

The Shotgun Fetus is now a Shotgun Baby! Congratulations to Atticus and his mom and dad! Now only Jells is left and then our plan for blogging baby world domination will go into effect.

And last but not least, major props goes out to everyone who helped me on my quest to be featured on A Clown on Fire‘s blogroll. You guys are awesome. Happy news! The Waiting made it on! All your checks are in the mail. Thanks to l’Eric for making this fun contest happen.