The Other Side: Notes on the Ninth Month 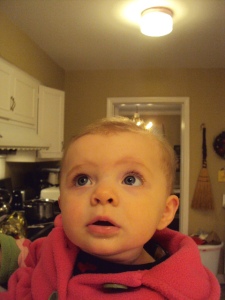 A girl with a curl(ish).

Even though we all know that 40 weeks actually equals ten months rather than nine (or at least those of us who have actually been pregnant know this, as that last month is probably the most miserable making us acutely aware of the passage of time), I can’t help but think that Miss C has now been out for roughly the same amount of time that she was in. She’s been in the world for 2012 and 2013, which makes her quite a woman of the world. It’s funny to me how much I groaned and moaned and felt sorry for myself during the more vomit-y moments of my pregnancy. Now that she’s here, I wish I could indulge myself and take a moment to nap or watch TV all day when I’m not feeling my best, but a crawling exploring baby doesn’t really afford me those moments.

I wouldn’t have it any other way. 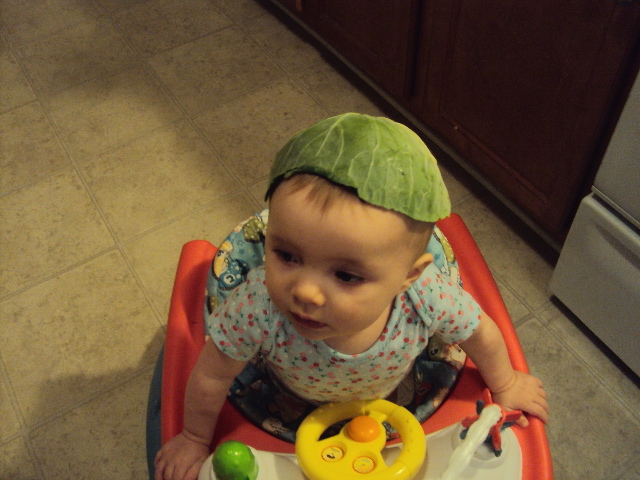 A cabbage leaf makes a good hat. (As does a tissue box. Bonus points for the reference.)

These last nine months have been rich and scary and wonderful. This small girl has transformed from a wiggling ball of sugar to a person who likes things, who knows me, and who dances and yells when she needs me. She has preferences and is hinting at the possibility of eventually forming opinions. I am so proud. Nothing she does goes unnoticed. I swell with happiness every time she discovers something new.

And she’s been discovering a lot. Crawling is passe. Now that she’s mastered it, she’s pulling up all by herself on sofas and coffee tables. She even shows a little bit of indignation when we put her in her scooter chair because she can go faster without its assistance and she knows it. She can feed herself her bottle now. When she reaches her milestones, I often get melancholy, but I like it that she can feed herself at least partially now because it gives me a couple extra moments to meander over my own coffee. Independence is good for everyone.

And words. There are words. Even though she’s unable to say them herself, she knows and responds to “breakfast”, “lunch”, “dinner”, “snack”, “bottle”, “bath”, “change”, “daddy”, “mommy”, “nap time”, “hello”, “goodbye”, and “car ride”. (She also responds to “Gangnam Style” but that doesn’t exactly make me look like the best parent.) B and I will likely start signing with her too, so if you have any experience with baby signs, please let me know in the comments because we need to start somewhere. 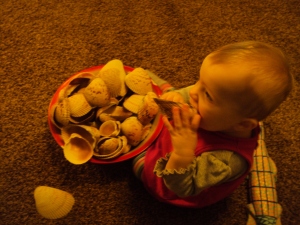 She found all the shells at Bubby’s house.

She literally started waving at us and other people overnight. When we were on the road for Christmas, we always stopped at Panera Bread for lunch because duh, it’s Panera and it’s the best EVER. Every time we went in, she waved at everyone and smiled and often squealed. I have no idea how she acquired the waving skill because it’s not something B or I really showed her how to do, so I guess it’s instinctual. Is it lame that I think she’s a genius whenever she waves at us and others? I think she’s a genius most of the time not because I’m overly doting but because I just can’t believe I CREATED this girl. It is amazing to me that at one point she didn’t exist and now she does. And not only does she exist, but she exists well and she is achieving things. Gah.

Strangers and extra activities are kind of a scary thing with her right now. We worked really hard to get her in a routine that she could depend on and to give her safety and security in her interactions, so it was only a matter of time until a deviation from those routines would scare her a little or at least put her in a tizzy. When we left her for an overnight visit with my mom while we were in Memphis, she had a hard time adjusting for the first couple hours (as did we). But eventually she realized that she was safe and loved so she relaxed. She is surrounded by people who love her and she knows it.

Taken approximately 11 1/2 hours into Christmas. It was a long day but she (and Grammy) were good sports.

I wrote about her dancing a few posts back, but dancing and swaying are a big enough thing for her that it’s worth repeating. She loves music and tempo and sways to the beat even when I’m doing something rhythmic like using the electric mixer or hammering a nail. I am planning on doing a post soon about some of the music she likes, which I think will offer an interesting postscript to the posts I wrote during my pregnancy about the music I imagined playing for her. I’m also contemplating putting up a video of her on the blog. I’ve been hesitant to do so in the past because I’m trying to define boundaries about what I will and won’t share here. Any thoughts (especially from the mommy bloggers) are, as always, appreciated.

So nine months. Three more and then she’s practically in college. I’m holding on. Happy nine months on this crazy planet, sweet girl.

We are the goodest.

← General Announcements
Some thoughts for Friday. Because it’s Friday already. I know, I’m shocked too. →