C and I have been going on a lot of walks lately. She gets into this strange baby hypnosis mode when we’re out exploring and sometimes for fun I wave my palm in front of her face to determine how zonked she is. She swats it away and is like, “LADY, I was in a reverie. Way to go breaking it.” Down the road and to the left of our apartment building is a small development of homes – one of those neighborhoods that looks like it was probably put together on a long weekend. Vinyl siding, no trees over six feet tall, houses that are basically the same but all have an arched second story window to hint at architectural originality. There are sidewalks over most of the development and there isn’t a lot of traffic, so that’s where we go.

A couple weeks ago as we were walking, we turned down an unexplored street and I saw a large, black, wrought-iron arch in the distance. As we neared it, I realized that it was the entrance to a small family cemetery. It was strange to see such an ancient, solemn space interjected among starter homes where I would not want to spend a lifetime.

I parked C’s stroller and looked around. All the tombstones were quite old; the most recent marker was from a death in 1988 but it was definitely an outlier, as most of the stones were from deaths that occurred from the 1840s to the 1920s. Most were broken and toppled and the largest one – presumably the one for which the family cemetery was named – even had graffiti on it. 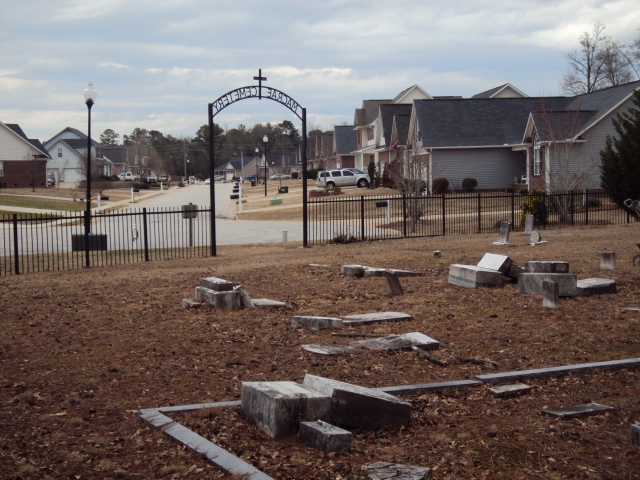 The wind started gusting since it was a cemetery and that’s what it’s supposed to do, and C got fussy just sitting there while I sated my morbid fascination, so we turned back for home a few minutes later. 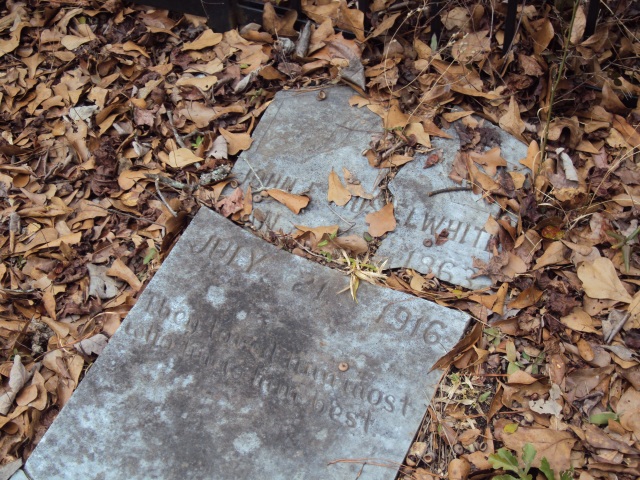 Back home, I googled the cemetery and the only thing I could find was an old (by Internet standards) description of the place from 2001 that described the cemetery and its location. At that time, the subdivision was still just a glimmer in its big box developer’s eye so only a dirt road could lead you to it. And the writer of the description advised a four-wheel drive vehicle to get you to it should you want to visit it yourself. What struck me most was that it was described as “abandoned” even back in 2001. The description was wistful: “This cemetery is in bad condition with many broken headstones. I had to piece some of them together just to read them.” 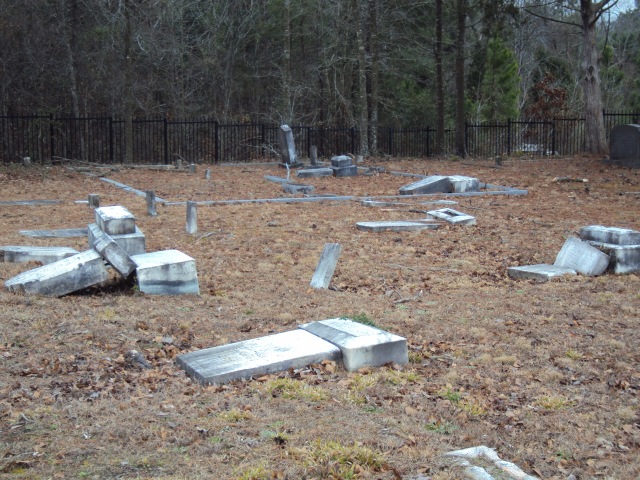 Thus ends the portion of the post I wrote a month ago and then abandoned, just like MacRae Cemetery. I have been mulling this place over in my head for weeks trying to pinpoint the exact thing about it that intrigues me. I want to find a message in this tiny forgotten cemetery down the road from me. I could talk about Death, but the hugeness of that topic overwhelms me. I could talk about the fact that C will never know either of her grandfathers, but that’s just too sad and fresh for me to visit. I’ll talk about that eventually, but I want those stories to be prompted by something less arbitrary than a random cemetery. I also played around with the idea of talking about the juxtaposition of something so old and precious with something so new and hasty. But mostly I just wanted to use the word “juxtaposition”. Juxtaposition, juxtaposition, juxtaposition. Now. You know that I know the word. So moving on.

Over the course of the month that I took a break from MacRae Cemetery, I did other things and countless other ideas blipped across my radar. MacRae got pushed aside but it persisted. What was I supposed to do with this old forgotten place? It was unfinished business that started nagging me to wrap up. I have this stubborn urge to neatly file away all my experiences in tidy white boxes that fit in the walk-in closet between my ears. I want to access them easily, and put them exactly where they belong, so it was driving me nuts that MacRae was basically tossed in a big pile labeled “pending” on my dinner table. Now that I’m facing it again, it is becoming more clear that the gloom and the one-acre can of worms I’ve opened is insisting that images and ideas persist across time. They have a life of their own (oh, and the irony that I just used the word “life” is not lost on me). Despite the fact that these tombs are old and forgotten, they still have meaning. Years after the funeral attendants of 1842 have died themselves, I am still grappling with the mourning and sorrow they felt over 150 years ago.

Just because things fade from memory and are replaced with houses teeming with more relevant activity and life doesn’t mean that they were all for naught. The gravestones are broken, but that adds to their story. Those lives that were lived and mourned over a hundred years ago are not stuck in the past like a mosquito in amber. They make up the experience of mine and my child’s life. They are the details that give our walks patina.