The House of No

Milestones. Just when I noticed that I hadn’t written a milestones post in awhile about C, she delivers the goods. I am happy to report that she is on track to becoming a functional human being. I am not so happy to report that in this process to big-kiddom, my death grip on sanity is loosening a little bit more. That’s OK, though. I never really liked control, sleeping, and not crying anyway.

C reached an important milestone last week. She learned to say no. And not only did she learn to say it, the true weight and power of the word was also miraculously imbued to her. The Grand Toddler Gatekeeper felt she had sufficiently proved her mettle, and after long last, that diaper-clad guru recognizable by the permanent smear of ketchup across his knee gifted her with an amulet (mashed Oreo with a few hairs in it) that gives C the ability to veto every reasonable request I make.

So far, she thinks it’s a truly wonderful word that should be said liberally, especially when the notion of riding in the stroller or having her diaper changed are suggested. Why lower oneself to the abasement of newborns and infants who are too dumb to know that graham crackers are in the cabinet and can (theoretically) be eaten for all meals, when you could just as easily notify your parents that you would rather not eat the healthier but likely poisonous fare they set before you? No is a fantastic word for this and many other inconvenient situations I force Wee Cee in.

There are very few scenarios where No isn’t invited.

• Snacktime: If C asks for a snack and I give her a banana, which she ordinary loves, she says no because she prefers the sugar-frosted butter sculptures of cats that we saw once at a playdate never ago.

• Toothbrushing Time: As a year-and-a-half-year-old, C knows many things. She knows that outside is better than inside and that socks are evil foot encasements. She also knows that toothpaste is delicious and should be eaten directly from the tube. When I suggest otherwise, she patiently lets me know that I am wrong.

• Screen Time: If she requests to see Elmo or Murray from Sesame Street on YouTube and I manage to find the one clip that makes you watch the full thirty second ad prior to viewing the clip, then it’s the end of the world as we know it and we don’t feel fine.

• Getting Dressed Time: There are ample reasons to say no to this obviously oppressive part of the day, but the primary one is that in our negligence as parents, B and I have failed to create a wardrobe for C that is comprised entirely of Elmo t-shirts. 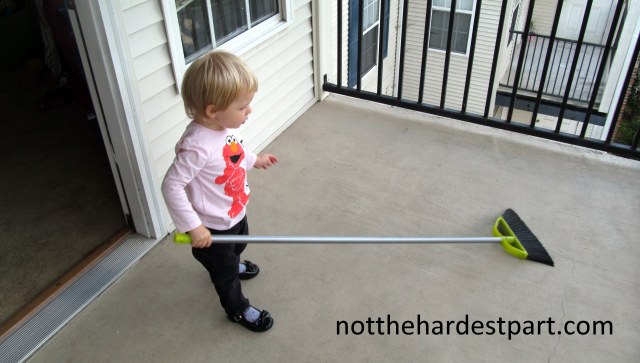 While No is a welcomed visitor for all these everyday situations, its versatility is truly showcased when matters of logic are involved. For instance, everyone knows going outside is wonderful, C especially. But often she prefers the indoor version of outside. She will request to go outside and we’ll put on shoes, jackets, etc., and then once it’s time to go, No and its closest confidante Tears will emerge. We will then have a picnic in the walk-in shower for thirty minutes.

No is even better as the holidays and other milestones approach. We have been priming her for potty training for a couple months now, talking about the finite nature of diapers and the joy of eventually going in the toilet. We even introduced the concept of Santa to her by telling her that he will likely (totally) be bringing her a potty for Christmas. Given how we’ve married the concepts of Santa and going to the bathroom, she probably thinks that he’s some kind of magical sanitation worker. But now that Event Potty is approaching, she will have nothing to do with having her diaper changed. Whenever we deign to request that she lie down while we change her, nos are coupled with flailing and kicking and the patented toddler Body Lock™. If we want to add fuel to the fire, all we have to do is put a cloth diaper on her instead of a disposable. C has decided that she is wary of her parents’ frugal, Earth-conscious ways, and would rather eat nails than be changed into anything other than her overnight disposables.

I think the saddest part of the whole scenario is that when she says no, she does so with the exact same intonation and discontent I use when I say it to her 800 times a day. This is the world’s way of punishing me for discouraging my child’s proclivity towards tasting dishwasher detergent.

So that’s C’s latest milestone. I know better than to ask you to tell me it gets better. I hear no enough everyday from my own child that I don’t also need to see it in the comments of my blog.

← An Ode to My Postpartum Body: A guest post
Too Big For a Blog →