Variations on the Theme of Love 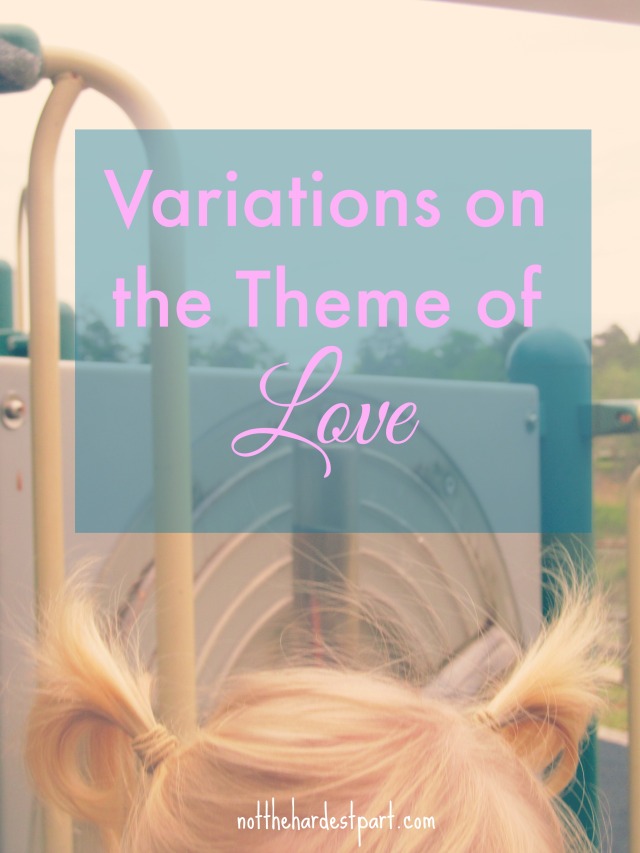 “There’s nothing new under the sun”.

I remember my mom saying this often when we were growing up. And really, it’s true, and I’m not just saying that because as a mother myself I am legally obligated to maintain the illusion that everything that comes out of the maternal collective’s mouth is platinum. The more I grow and experience, the more I’m struck with that comfortably novel feeling of deja vu, that electric hair-standing-up-on-the-back-of-my-neck thrill that I’ve been somewhere before.

Sometimes it’s chilling to recognize that I’m heading down a well-worn path that I’ve been on before. I am nothing if not dense and I often have to make the same mistakes about a hundred times before I create a plan to avoid them. It’s actually really ridiculous: I will be in the middle of doing something that has caused me problems in the past and I’ll identify it as a stumbling block right as I’m doing it and instead of extracting myself out of the situation while there’s still time, I just push on through, looking at the consequences ahead square in the eye as I run right into some all too familiar chainsaw. Case in point: peanut butter exists and I abuse it.

But more often, I love the feeling that there are certain themes in this life that I am highly attuned to, patterns that I can predict. The themes I tend to write about come to mind. Almost all of my parenting writing has a baseline flavor: my baby is growing up. She’s mine, and she’s growing. When asked if she’s a baby, C thinks for a second, rolling her eyes off to the side as she considers what you’re asking her, and replies, “Big guwl.”

Her growth absolutely dazzles me and it is endlessly heartbreaking. I remember so vividly the first time I felt her kick – it seems like it happened about five minutes ago – and last week she got her first haircut. It doesn’t seem like the span of two and a half years should be able to contain those two vastly different touchpoints in her life as a person and my life as a parent. I love thinking about all that she has in store and celebrating the milestones she hits along the way. Sometimes those celebrations are literal and loud – who doesn’t love a birthday party? – but more often than not they are simple reveries that only take place in my own mommy space. I consider who she is and was and will be, maybe write a blog post, definitely shed a happy tear that my daughter is the way she is.

She kicked me, she took a step, she got a haircut. All these events are precious to me because they are part of my child’s history. They are part of the unfolding narrative of her life, and I get to watch and record them.

I consider it the biggest challenge of my life that this little girl has been placed in my watch, and I hold out faith that because I love her so much, I won’t damage her too horribly. She’s getting bigger and doing new things (she talks now, y’all!), but the way I behave each time she hits a new milestone, you’d really think that this parenting gig is completely new to me.

There’s nothing new, but parenthood certainly makes you forget that. Every time your child does something that indicates that they are outgrowing their baby self, you remember the thrill you felt when you first felt them kick.

There is a middle school across the street from us, and today C and I went out for a walk right around dismissal time. A girl carrying a violin case walked five steps ahead of her mom out of the office and to their car. I was struck by the way the two of them moved so independently of one another. There were no strollers to push, no talk of what color the birds in a nearby tree were. They just walked and were so clearly in a completely different place than C and I am in now.

But really, we’re all the same. I don’t know those people, but I do know that mother loves her girl and the space between them is just as meaningful as the tangible closeness I have with C right now. We are all moving in tandem in our own special ways.

And when C eventually walks ahead of me, I will celebrate it. That’s just what moms do.