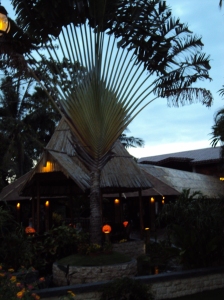 So in late October a couple of years ago, we were living in Korea and spending our days hanging out with cute lil’ kiddies and attempting to teach them a little bit of English in the process. Around this time was the big swine flu scare. Enough kids were contracting the sometimes fatal disease that both we (teachers who could only get out of working if we were literally on our death beds) and parents were pretty alarmed at the probability that we could be affected.

A little background: when we worked in Korea, we worked at a school called a hagwan. A hagwan is an academy that offers lessons in any variety of subjects; in our case, these were English lessons. Our English hagwan, like many others, offered kindergarten to little bitties in the morning, and in the afternoon, elementary-aged kids who had been at the public school all morning would come and get their daily dose of English.

So it finally happened: a child from one of the local elementary schools many of our afternoon students also attended contracted the swine flu. Living in a pretty small community, the news traveled fast and the parents of our students temporarily pulled their kids out of our school in droves. Our school closed down for a long weekend.

Creepy and spooky? Not so much. Freakin' awesome? Check.

A LONG WEEKEND. If you’ve taught in Korea, you know that those are as rare as a delicious but also reasonably-priced piece of cheese or a taxi ride that doesn’t make you fear for your life. So we jumped on it. With our friend Emily*, we pretty much threw the proverbial dart at the map, it landed on the Philippines, and we were on a flight to Cebu the next day.

It was thrilling to fly the coup on a whim like that because we *technically* weren’t supposed to leave the country without notifying our boss who would have doubtlessly clucked her disapproval and banned us from going. That’s just Korea; it’s not an oppressive place, but some businesses still operate under a system where employers feel that they own their employees and can instigate parental control over them. Being American adults, we knew there was really nothing they could do (except maybe be mad at us for a few days and prepare an innocuous “write up”) if we got caught.

We chose to stay at a little bayside resort on the island of Cebu for our getaway. The area surrounding the resort wasn’t exactly the kind of place we felt safe trampsing around in our free time, but that was fine by us. We made ourselves at home right away. One of the things we latched on to pretty quickly was the existence of an outdoor pool table. To this day I really hope there was no one else at the resort during the time we were there who wanted to play pool because we had the placed staked out pretty much the entire time. I think I remember Emily and B making up some new game that they were sure would catch on once they demonstrated it to all our friends back in Yongin. Vacation really gets those creative juices flowing!

The resort was beautiful, the food was amazing, and the drinks were, well, here’s some pictures of the drinks:

I KNOW, RIGHT?! A-ma-zing. And it was all really inexpensive. So next time you throw a dart on a map but you don’t have much to spend, pray that it lands somewhere in the Pacific Rim.

Each day consisted of:

2. Discussing what sadistic punishments our boss would come up with if she discovered that we left the country

4. Walking out on the wharf and seeing what we could find

When the tide went out, we could walk out into the bay and discover all kinds of little creatures, like these: 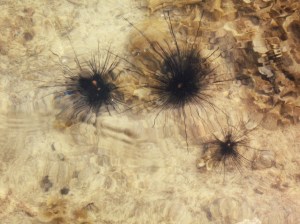 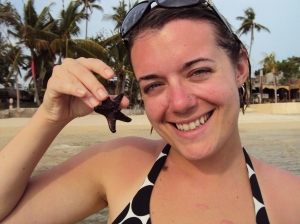 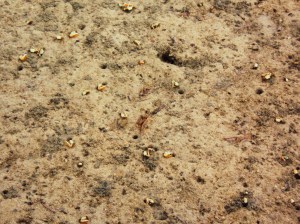 Strange little crabs with only one beefy arm

One day, B walked out on the wharf and some kids who were out in the bay collecting sea creatures melodically yelled out to him.

“Yoohoo, American! You are very white for you! (Giggling) You want to give us money?!” (Uncontrollable laughter)

The security guy from the resort immediately darted out from the shadows and started yelling at them in Tagalog, as if this had happened before.

“Sorry, old man!,” they replied in stitches. “We don’t understand your English!”

The old man security guy was the only person not laughing at that point.

Unfortunately, all good things must come to an end and on October 31, 2009, we left our haven for the Cebu Airport to return to Korea. Actually, we were quite anxious to return because a tropical storm was headed our way and we wanted to return to a country where the only bodily threat we faced was the kindergartners’ projectile vomiting.

After a harrowing adventure at check-in**, we arrived at the gate and waited for our flight.

At a Christmas-ready restaurant in the Philippines on Halloween

The departure time came and went without any notification from the airline, and we started to get a little nervous. Granted, it was Saturday and we didn’t need to be back at work until Monday, but at that moment we began to rue the fun that we had made at our boss’ expense. Hours eventually passed. We killed the time by going to a nearby restaurant in the gate and eating fried rice which only in the dead zone of a airport terminal somehow costed us $14.00.

The funnest way to spend Halloween? Stuck in an airport in the Philippines eating rice and wondering if any airline employee is ever going to notify you of what the heck is going on?

However, we did indeed eventually make it back to Seoul and celebrated Halloween with the cutest little vomit-lobbers that I can think of.

*One day I am going to write a post on all the other Emilys I have not only been acquainted with throughout my life but who I have actually been very good friends with. It’s a high number, folks.

**Again, I am saving this story for another post I will write someday on the perils of air travel. Let’s just say that this misadventure involved us giving our passports to a random lady who claimed to work for the airline.

← A Brief Weekend Observation
Won’t you be my neighbor? →