Today is your lucky day! I am too sleepy/busy to write a post that has an actual point to it, so I am resorting to a story that I’ve been saving for just such an occasion. I was tempted to tell it back when I was preggo, but I knew the day would eventually come when I would need it to fill the time between feeding and changing the baby.

It’s the one about the time a drunk Korean call girl ran into a plate glass sliding door. This one is rated R so if you are in the habit of reading random blog posts to your chillens, I would advise against sharing this.

In case you want to Google it, when B and I lived in Korea, we lived in Jukjeon-dong, within the larger city of Yongin-si. If you Google it, you’ll find that Jukjeon is a bit south of Seoul. It’s an easy 45 or so minute bus ride to the center of Seoul or a 50 minute ride on the subway; not too shabby for a Saturday or Sunday commute but kind of a pain after a long day of work on a weekday. Therefore, pretty much the entire foreigner population in Yongin and Suwon was beyond thrilled when a new location of Geckos – a popular foreigner bar in the heavily international Itaewon area of Seoul – opened in Jukjeon. Not only was it close to us, it was literally across the street from our apartment. We’re talking a five-minute walk from our abodes to cheap booze.

Yeah, that’s as awesome as it sounds. 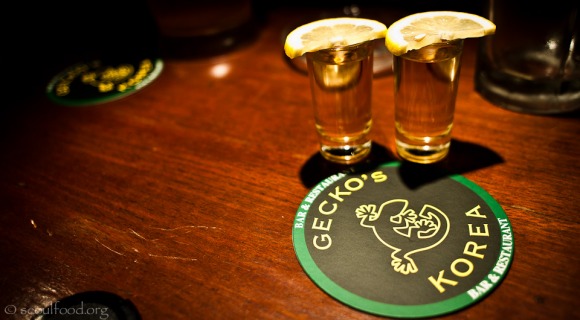 This place had it all. Of course, the company we kept there was pretty outstanding to begin with, seeing that we were close with and actual friends with all our coworkers. Geckos was our watering hole. The food was good, the drinks were cheap and delicious, the bartender – nicknamed “Jamisil” after a brand of soju – was fantastic and loved us. Almost every Friday night, and often weeknights too, we would all head over to Geckos for dinner or drinks and to unwind. The staff got to know us and love us. It was Our Bar.

So, one Friday night after dinner on Euro Row, B and I headed over to Geckos to meet our friends for some drinks and general revelry. As part of a sizable yet still pretty cozy group of foreigners in our area, we immediately noticed some new faces that we had never seen there before. In the middle of them was a guy – let’s call him Joe because I don’t remember his real name – who B had met before. He was Canadian but by some stroke of coincidence, B grew up down the street from Joe’s uncle in Memphis.

Our friend Steve found this pig in the garbage outside his apartment once and it made the rounds in all our friends’ apartments until someone finally decided to give to Geckos in January 2011. Rumor has it that it’s still there.

Once he got his drink, B headed over to the bar to say hi to Joe. It turns out it was his birthday and the newcomers to Geckos were his friends celebrating with him. Amidst Joe’s friends was a conservatively-dressed Korean woman. This was not odd at all. We all assumed that she was one of Joe’s Korean co-teachers.

So an hour or so passed by. By about 9:30 the bar was getting busy and everyone there was taking advantage of delicious, inexpensive cocktails and beer and thus becoming more and more intoxicated. More of our friends arrived and more of Joe’s friends arrived to celebrate his birthday with him. At one point, I glanced over at Joe’s table and noticed that the Korean woman who had been celebrating with him had made a costume change: she was now clad in the apparel of a “Juicy Girl.”

“What is a juicy girl?,” you may be asking. I wish I could tell you exactly, but I never got an altogether straight answer while I was living in Korea. A juicy girl is an ambiguously sexualized woman who is paid to hang out and drink with a guy or group of guys all night, but it’s kind of up to her if she ends up making sexy time with the guy later. Sort of similar to a geisha, but at the same time not at all because geishas don’t wear tube tops and hotpants, nor do they get plastered with their male hosts. Plus there’s the whole “hundreds of years of serious tradition” thing with geishas, and call girls go back way farther than that in one shape or another.

Why she started out the evening dressed as a librarian and then changed into a hoochie, who knows? Maybe that was part of the whole fantasy or whatever. But it turns out that gal was hired by Joe’s friends to keep him company for the evening. What great friends.

B and I are no prudes, much (much!) less so our friends, but we were a little shocked to see this little arrangement taking place at our Geckos that night. I mean, the place has a kids’ menu for cripes sake. Save the ho-hos for Seoul, buddy. We’re in the ‘burbs!

But how could we begrudge this guy his paid hotpants-clad companion? Whatevs, we thought. Let’s just see how this unfolds.

So the drinking continues, the bar gets more and more packed, and everyone is having a grand ol’ time, as per the usual. Miss Hotpants was living it up with everyone is Joe’s party and drinking a lot. Despite the fact that Coyote Ugly seemed to always be on TV in Korea, she had clearly never seen it before because she was actually drinking shot after shot and not spitting them out. Dude, even I could teach her a few things about being a juicy girl. Me, the one whose relationship with beer has a tumultuous past.

She drinks, she dances, she is everyone’s best friend. Until…

I was at the bar with my friends Paul and Sally chatting and drinking something like crappy beer mixed with tomato juice and Tabasco. All of a sudden, we hear a loud THUNK followed by the reverberation of glass against steel. The entire bar – filled at capacity at this point – all stopped, turned around, and saw Miss Hotpants in a crumpled puddle on the ground trying her hardest to get back up and continue the revelry. She had walked straight into a plate glass sliding door with so much force that the door had been knocked out of alignment with its railings.

A woman close by helped her up into a chair and procured an icepack for her. How could we not feel bad for this poor girl? Getting drunk with a bunch of foreigners who can hold their liquor not better than her, only to walk into a window and develop a mild concussion? Whoomph.

But she was not down for the count. In less than five minutes she was up partying again whilst the bar staff busied themselves with getting the glass door back into its railings, much to the chagrin of English teachers at the bar who needed – NEEDED – their $3 beers  posthaste (notice how I shimmied that word in again? I’m on fire!)

The bartenders at Geckos could blow fire as well as perform maintenance on sliding doors. Can we say “well rounded”?

She latched back on to Joe, as this was presumably what she was paid to do, and the partygoers of Geckos quickly forgot about the incident. Moments later, Sally and I decided to make a quick potty run.

Upon entering the bathroom, Sal and I quickly realized that we were not alone. Not by far. In a testament to their classiness, Joe and Miss Hotpants had already staked out the joint for deal-sealing.

After making eye contact with Joe in his mid-coital ecstasy, Sally and I barfed in our mouths a little and hightailed it out of there. Having had a few adult beverages at that point ourselves, we decided it would be a great idea to go tell the staff that the ladies’ bathroom needed immediate attention as someone had made a giant mess on the floor. Koreans are prompt if anything, and they hopped to it with the same swiftness they had when they had to realign the sliding glass door and headed with a mop and bucket to the ladies room to find the loving couple.

Miss Hotpants was immediately thrown out of the bar, with her large totebag filled with both of her outfits.

Joe was drunk and hopping  mad. He found Sally and me amongst the crowd and decided to share his feelings concerning this matter. We saw him coming from across the bar and braced ourselves. 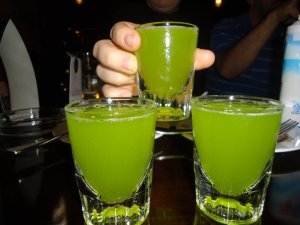 “Not cool. NOT COOL.” He directed his abbreviated-for-affect diatribe solely towards Sally. I guess he hadn’t seen me.

Sally, a normally terse and calm individual, leveled with him.

“OH REALLY? You know what’s NOT COOL, bro? I’ve had three drinks in the past two hours and right when my friend and I here decided to visit the bathroom, what do we find but your sorry behind in the ladies’ room with some prostitute, BLOCKING THE TOILET.”

Joe was speechless. I give some of the credit to Sally growing horns and reading him the riot act right then. But I give most of the credit to the vast quantities Joe had consumed up to that point because right then, in one fell swoop, he turned to walk off, vomited, and passed out on the floor. The night was over for poor Joe.

For a second I thought of making this a Tales of the World for Miss C. However, it quickly occurred to me that there is little to learn from a story about a Korean call girl drunkenly walking into a sliding door and then getting thrown out of a bar.

Except, maybe, don’t ruin your life. That’s a pretty good lesson, I suppose, but hopefully she’ll get it elsewhere.

← The Other Side: Notes on the Second Month
Time is Precious, I Know →