A couple of weeks ago, we visited Kendra and her husband in Charlotte. It was the first time we had been to their new house since they moved from Salinas, California and we were impressed with their new digs. They live in a grown-up house. 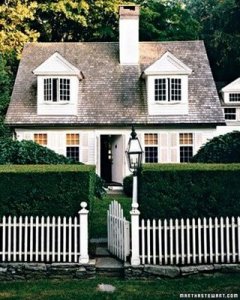 Not their house, but close enough. Source

Their house is what you think of when you think of a place to raise a family. Front porch, a big family room, an upstairs that enables everyone to have their own space. Some of their neighbors even really have white picket fences. The place is beautiful and spacious, and I’m proud of my friends for working hard and being able to live in such a place.

We drove there on Saturday morning, and when we arrived around three, Miss C was her regular genial self. In about an hour, though, her impending teeth got the better of her. She was inconsolable for several hours, more inconsolable than she’s been in months. B and I tag-teamed her upstairs so that one of us could hang out with our friends, but around the 2 1/2 hour mark, I got upset and worried that it was something else. Thus those mama tears started flowing. Bedtime was an ordeal. She’s usually down by 8:30ish, but that evening was harder than usual because she had refused to eat when she had been so upset. Plus, she was in a different place. She finally went down for the night around 10:15. And I was harried and relieved that the day was over.

She would have cried the exact same way if we had been in our own apartment. Those teeth don’t care. They come wherever she is. She has since cried that hard at our apartment. But it was easier at Kendra’s place. Her place is big so C’s cries have more space to roam and my head has different things to focus on. At Kendra’s house, you can put the baby in a stroller and walk her around the neighborhood until she settles. At Kendra’s house, it takes three minutes to make the gauntlet around the place, as opposed to the 45 seconds it takes to slowly stroll through our entire apartment.

I hate our place when C cries. The apartment does a poor job of containing her frustrations. Or, more likely, my own frustrations. I sit on the sofa with her in my lap, doing everything I can to sooth her, and the opposite wall that’s ten feet away infuriates me by its close proximity. I get up and waltz her through her room, the living room/ kitchen, our room. B is there, not seven feet away, and it feels so crowded. “Can you try?” He takes her and jiggles her while I sit on the sofa, annoyed and tired of the wall. I miss every other place I ever lived.

My brother and I grew up in houses. The first in Memphis, the second in Oxford, the third one in Murfreesboro, and then the last one in Germantown where my mom still lives. Those houses seemed big, but then again I was small when I was there. I knew kids growing up whose families lived in apartments and I always felt sorry for them. I equated apartments with divorce and day care and eating Domino’s for dinner not because it was fun but because the parent didn’t have time to prepare something.

And of course, here we are living in an apartment. Not a great one, either. I often whine to myself that it’s not fair that my dad never even finished college, yet we always lived in houses that my parents owned. B and I both have master’s degrees and we live here. But who am I whining to? The world? The world doesn’t care what’s fair and what’s not. And it certainly doesn’t give one iota that we spent some of our own time getting educated. Would we ever want to even own a home? We tell ourselves that we wouldn’t. It’s too much work to maintain. It’s a long term investment that may never pay off. It ties us to jobs we will likely want to leave. Those things aren’t worth it just because I don’t want to stare at a wall ten feet away from me and because owning a home when you have children is just what one does. No, not for those reasons alone.

We were driving home from Charlotte the following day and B ask me, “So what did you think of their neighborhood?” Coming from him, such a question wasn’t as innocent as it sounds. We’ve had many cynical conversations about home ownership, so he was just gauging me to see if I still felt realistic about where we live.

“It was really beautiful.”

I left it at that. Right now, our life is a small apartment and I will be content.

← You look as though you need a case of warm-fuzzies. I am here to remedy that.
Finding Flow →