The Other Side: Notes on the Sixth Month

Six months and one day ago, I was still a pregnant lady who could (in theory) sleep as late as I wanted, go to bed when I wanted, take a shower in complete privacy, watch every single episode of Arrested Development in one sitting on a whim, and get more done in one day than I can often get done in the space of one week these days. And do you know what? My life is about a bajillion times better now. This little girl has made me sing for my supper, but it turns out that when you have to work – really work – you feel pretty dang amazing at the end of the day. She has taught me to appreciate the tiniest little things in life as miracles. I can so see now why new parents constantly feel like their babies are geniuses. When you see a child grow from being a tiny sack of crying sugar in their first days to actually being able to move around on their bellies, you know that it’s a big freaking deal.  She highlights every moment – even if she’s screaming – as the most special time I can imagine simply because she exists.

She’s pretty much the most adorable child in the history of the world.

Teeth have been happening. Last night, Miss C was gnawing on B’s finger when he let out an “ouch!” and followed it with a “no I mean really. OUCH.” I scurried over to pry open her mouth, and there I found a tiny white dot on her lower jaw. I squealed with delight at the prospect of my growing baby sprouting teeth and she was terrified at my squeal and promptly wept as if the news that Elmo had just been hit by a bus was trending. I have got to learn to keep the volume down.

Also, solid food is happening. FYI, “solid foods” is such a misnomer. There is nothing solid about cold pureed squash. So let’s just call it “human food.” She has been eating rice cereal for dinner for the past three weeks, and last week we started her on human food at lunch too. So far she has tried squash and avocado, both of which she likes. Not overwhelmingly so, but she has yet to reject the food, and I’ll take that. 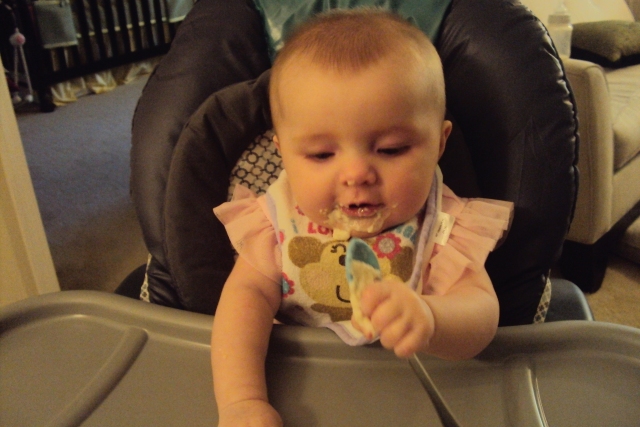 She played, then she passed out. Extra points if you can spot the baby.

Her naps are becoming more consistent, although I know that now that I’ve said that she will likely go on strike and refuse to sleep for a week. It finally dawned on me that when she doesn’t nap well, it’s because she’s either 1, teething or 2, going through a growth spurt. I am so dense sometimes that it kills me. I console myself with the thought that I lit-rally have no idea what I’m doing as a parent and that I don’t have any family in town to help me. The learning curve is steep, but I’m not going to throw in the towel just yet on learning to be a parent whilst she learns to be a human.

She keeps a-rolling and a-rolling but hasn’t yet sat up completely unassisted yet. Interestingly, though, she has skipped ahead to what I like to call “pre-crawling.” On her stomach, she moves her legs and arms back and forth like she’s swimming and she gets super frustrated when she doesn’t go anywhere. It won’t be long, and she can take her sweet time as far as I’m concerned because I’m not ready to babyproof the apartment just yet. I’ve gotta finish making her Halloween costume. Priorities: I’ve got ’em.

The more she does, the harder it is for me to re-calibrate my own life. Luckily, I’m finding it easier and easier to just give up control for five minutes and hand her off to B on the weekends and ask him for help when I need it. We got in a rut for awhile when I felt bad asking him for help and he didn’t really offer it because he thought I had everything under control because I never asked for help. But I’m getting more comfortable requesting assistance and resisting the urge to tell him he’s doing something “wrong” when he bathes her or feeds her. Of course, they get along famously. He can make her laugh in ways that I simply can’t. And he’s much, much better at coming up with new and interesting ways to entertain her, likely because he’s not here with her 80% of the time so he sees her with fresh eyes. I don’t know what I’d do without him. Actually, I do know: I’d be a crappy mom. 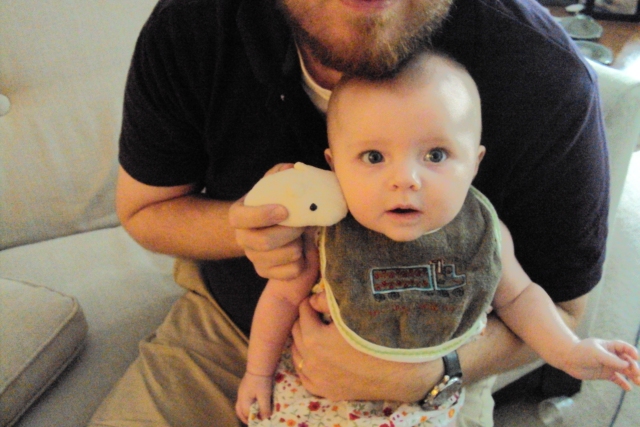 I know I’m biased but dear lawd my baby is beautiful.

So the sixth month. Happy half birthday to my precious Miss C! The love I have for her is just more than I can describe in a blog post. My life now is admittedly a lot harder than the one I had six months and one day ago, but I wouldn’t change it for all the tea in China. Or England. Or India. Or wherever they have good tea. She’s about 43,827,543,956 times better, easily.

← Forgetful Jones, You Are Not Forgotten
Have you disappeared down the parenting rabbit hole? →