Forgetful Jones, You Are Not Forgotten

Awhile back I saw this image macro floating around on the Intertron: 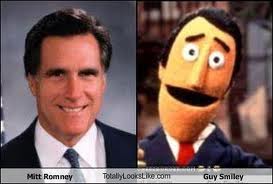 Aside from the fact that the comparison of Mitt Romney to Guy Smiley seems a tad bit forced, this picture bummed me out. It reminded me that there was a time when Guy Smiley – a character from the Sesame Street of my 1980’s upbringing – was part of my everyday life. Now it’s Mitt Romney who I hear about every day, and I have publicly-funded broadcasting to thank for both. It’s a mixed bag, this up-growing. I miss Guy as I miss all those old characters. Don’t get me wrong, I’m not hating on Elmo. I think he’s cute and Wee Cee likes him, so we are kosher.

So what do you do when you think of old friends and decide to troll them? You friend them on Facebook. Then, if you think that your eons-old relationship with them was as magical for them as it was for you, you message them and hope for a response.

Here are those messages.

Hi. Remember me? Haha. Sorry, that was kind of douchey of me. (Did I just say “douchey” in an email to an old Sesame Street character? Cue self loathing.) I was watching the Gangnam Style horse dance the other day and I thought of you. Random, eh? So, what are you up to nowadays? I never learned to ride a horse, but I did learn that my own forgetful tendencies were due to moderate ADD. Maybe you should get that checked out too. You are probably now thinking “Who is this person and why is she messaging me with a diagnosis of my forgetfulness?” Good question. I was that little girl wearing cowgirl boots and a hat whenever you came one. I loved you. Still do. 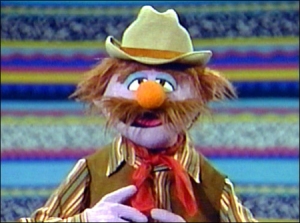 Wassup, homefry? It’s been awhile. I can’t believe I have finally found you! While I was making some kale chips yesterday I thought of you and realized I always liked you more than Cookie Monster. This is likely because I felt kind of bad for you and your little costume with a picture of a carrot Scotch taped to the front. Still keep in touch with Eddie Spaghetti? You will be happy to know that my baby likes squash. I will be happy to know if you ever attacked that unibrow. Please let me know!

Hey, Prairie Dawn! What’s up?! OMG, you were THE BEST. I don’t know how you were able to deflect Cookie Monster’s tomfoolery all those times, but your sass and exasperation always packed a whollup. So how are things? Do you still live on Sesame Street or did you leave for college? Did you go to Vassar and study music like we all expected? Can’t wait to hear from you, homegirl.

I hope you are the same two-headed monster I knew back in the day. Since there were several “Two-Headed Monsters” listed on Facebook, I had to make my best guess that this is you. Otherwise, please disregard this message! I can’t imagine why you didn’t make the cut of the monster-heavy Sesame Street cast of today (yet claymation Ernie and Bert somehow did), but your presence is missed. What are y’all doing these days? Ever thought of staging a comeback by performing The Odd Couple? I know, dumb idea. Put your heads together and I’m sure you’ll come up with something better. 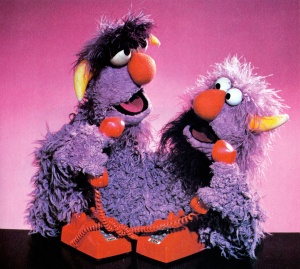 I saw a puppet of you at a flea market this past weekend and just had to look you up. ‘Member how you were the world’s greatest detective? I do, and that’s why I’m surprised you never showed up on CSI, Law and Order, Criminal Minds, or that show with LL Cool J and the principal from Kindergarten Cop. No worries. I’m sure that if half a chicken salad sandwich goes missing, you will be called in as a first responder. Miss you much, friend. 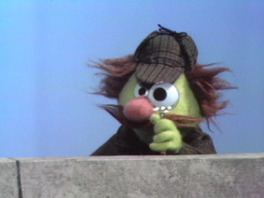 *All images Copyright Children’s Television Workshop. Except the one of Mitt Romney. I don’t think CTW would lay claim to that one.

← Tales of the World: Get Naked
The Other Side: Notes on the Sixth Month →