I’m going to talk a little about Elvis. I’m from Memphis, so it was bound to happen eventually.

I thought I could excuse myself from the Remember That Time festivities this week because I’m currently in my hometown of Memphis visiting friends and family, but I quickly learned that it’s pretty near impossible to co-host a nostalgia linkup and avoid writing about that town when all the memories are just begging to be recorded. So here we are. Hiiiiiii.

Growing up in Memphis, I imposed a moratorium on Elvis. There would be no discussion of the King within earshot of me because he was like totally lame and old and stuff and OMG did people really dress like that? Le barf. He was made for no other reason than to be screen printed on cheap t-shirts sold down on Beale Street and to make old ladies feel young. He was the son of my hometown, and I would have none of him, thanks. 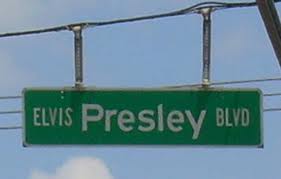 That is, unless you give him to me over the radio. I loved me some swag when I was in the fourth grade, primarily because you can only get so far in life when your worldly possessions consist solely of Barbies whose hair you cut off and a collection of denim vests and Keds. So when the radio decided to give things away, I put their number on speed dial.

I aspire to be Mark-Paul Gosselar’s rhomboidal hair when I grow up.

Elvis Week (yes, that is a thing) was a time of year when the local radio stations played fast and loose with the giving away of merch (that’s short for “useless garbage”), so despite my distaste for Elvis, I called in when the DJ offered a chance to win an Elvis prize pack. Clearly Saved By the Bell was on commercial or I wouldn’t have even bothered. And I got through! I didn’t even have to answer any questions to receive my bounty of Elvis paraphernalia, consisting of tickets to Graceland, a subscription to the Elvis magazine (again, yes, that is a thing), an Elvis t-shirt, and a copy of Elvis: Live From Honolulu. This was a dream come true for me at the age of nine. I would surely be the envy of all my classmates when I came to school wearing an adult-sized shirt emblazoned with an entertainer who died several years before we were born.

My mom drove to the radio station to pick up all my loot. A few weeks later, she took me and one of my friends* to visit Graceland courtesy me and my phone dexterity. I was very impressed with Graceland because Elvis got to be buried in his own backyard and also because he had a Jungle Room in his house. The on-site cemetery was the height of sophistication for me. There is actually quite a bit of overlap between the taste of a fourth grade girl in the 90’s and a musical superstar of the 60’s and 70’s.

*Come to think of it, it was the girl who hosted the sleepover party where I almost got swallowed up into Hell. This girl is clearly becoming one of the supporting characters of my Remember the Time posts. That probably isn’t a very good thing.

I loved our trip to Graceland because it provided me with the opportunity to visit a part of Memphis that I had never been to before; for those unfamiliar with the city, there isn’t really a Gap close to Graceland. However, what I really wanted was to listen to my Elvis CD. It was the first compact disc I ever owned and I was discouraged because my family had not yet upgraded our family tape deck to play those tiny records. The only way to solve this problem was to take my CD over to my young, hip Aunt Jaye’s condo (which on more than one occasion I referred to as a “condom” at a church lock-in) and have her put it onto a tape for me so I could listen to it. Mind you, I still disliked Elvis, but since it was my CD, I needed to listen to it.

Jaye transferred the CD over and wrote each song title onto the tiny lines on the Memorex insert. I carried my tape home proudly, put it in our family’s stereo, and sat in the wingback chairs in our den with the sole intention to listen to the entire thing. I think I lasted nine minutes. I just couldn’t make it through Elvis’ crooning. Even though I loved his house, I simply couldn’t bring myself to sit through hours of his music. This may be the only indication that I was sort of normal back then.

1. Write your post. Remember, all it can be ANYTHING about the radio. Just try to stick with the whole “back in the day” vibe ;D

3. Add your link below and come back to see all the other great posts your blogging pals have written about the radio! Comment on them and tweet and share your favorites!