Yesterday. Yesterday was that time I gave my child a mullet. Thanks for asking.

My friend was on Facebook the other day polling the crowd on what track she should take when she goes back to school in the fall. Most of the people in the medical field said she should study something in the nursing neighborhood, but the entire time I was thinking to myself,

GIVE ME HAIR. LONG BEAUTIFUL HAIR.

Having no knowledge of what it entails to get a stylist’s degree or how much they actually make, though, I kept my mouth shut and did not leave a comment. I am a blogger straddled with a staggering amount of student loan debt because I decided to get a master’s degree in the highly lucrative field of English, and no one deserves me as a career adviser.

But if you really want to know, you should all go cut hair. It’s the best job probably ever. Because you get to cut hair.

I cannot explain my fixation on cutting hair. It apparently started when I was a little kid and chopped a handful of locks off my own head. Like many other girls, I soon moved on to Barbie. I had a bunch of them and they all looked like this by the time I got through with them:

I always loved how Barbie only had like 100 pores on the top of her head. Yet another way that she is anatomically incorrect.

There was also this huge Barbie head that was about the quarter of the size of a real child’s head, and you were supposed to do its hair and makeup. I never had one because I assume that my parents knew I would defile it within five minutes. Instead, I would plot visits to the homes of acquaintances who did have these dolls. I’d send them to the kitchen to fetch us a plate of Nilla Wafers and then *accidentally* cut its hair off with a pair of safety scissors I had smuggled in. I was in a bad way.

Little girls liked to make their Barbies look like Dolly Parton in the ’80s.

One time when I was a senior in high school, I convinced some goofy sophomore that I was “real good” at cutting bangs, which she let me do. What kind of a failure of a parent are you if you allow your child to be convinced by an upper-classman that it is totes OK for her to come at her face with scissors between classes? I can’t even.

So is it really a surprise that I have been chomping at the bit for C to grow enough hair that I could focus my maniacal hair-cutting obsession on her? She has had this giant wisp of hair in the front for awhile that she wouldn’t let me pull back into a clip, so it just hung down in her face and made her look kind of like a tiny, cute, blonde Danny Zuko. 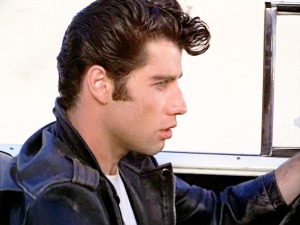 That hair is its own ecosystem.

At breakfast on Saturday*, B mentioned it for the first time.

“NO PROBLEM YOU JUST SIT TIGHT AND I’LL GET THE SCISSORS.”

I guess that with age, I have acquired a bit of restraint. Instead of trying to remedy her bad haircut with more choppage that would definitely make her look worse, I have lain my scissors aside. I keep telling telling myself, “It’ll grow out, it’ll grow out” and that she won’t look like this for long. I’m even prepared to blame her for the bad haircut if someone calls us out on it in public.

“Oh, you know toddlers! You put your guard down for a second and they chop off their hair!”

All I know is that those thousands of dollars that I spent reading Chaucer in old English were probably better well-spent on a semester at beauty school or even just a Flowbee.

*And before you start splitting hairs (lulz), I know that this post is titled “Yesterday yadda yadda.” I write them in advance. ‘K?

← You Got the Pink Stuff, Baby.
Remember the Time…we had that teacher? →