Being a little kid is the absolute best (and sometimes, worst) thing possible. Yeah, you don’t have a lot of control over your life, but that frees you up to unabashedly explore all the weirdness you’re surrounded by without being self-conscious about it.

You can watch your Barbie video four times in a row, loving it ever more upon each viewing, and then demand it be shown again right then, oblivious that all the adults around you are losing their minds preparing taxes or doing laundry.

You can go in your backyard and pull up monkey grass and other strange roots, mix it with a little water, serve it up in a Frisbee to your brother and call it Mongolian beef. Who cares if that one fungus you added was potentially poisonous? You’ll cross that bridge when you get to it. Or, more likely, your parents will.

That stuffed Humpty Dumpty toy you were given? Hmmmm, it looks like it would be a perfect fit for the commode. Let’s just test this and see if our predictions are correct.

Being a kid is awesome and bizarre wherever you go, and it can be even better to see Kiddie Culture at work in a whole other country. In America, cootie shots are standard-issued upon entrance into the second grade and MASH is the go-to game when you get a bit older and desire to see whether you’ll be living in a shack with the smelly kid from your class yet somehow affording a Ferrari, or jet-setting with your crush du jour and returning home to your Tercel. When we arrived in Korea, we quickly began to see how a major facet of their kiddie culture is centered around the butt.

Yes, the butt. Now, growing up in the US, I can remember a huge amount of humor being gleaned from the posterior, but in Korea it is taken to a level beyond what we have here. The comedy of the rear end permeates almost all stratum of the World of Child, and it is wholly acceptable and deemed cute and childish. A Barney-esque television show starring an orange character with a lettuce leaf on his head produces what can only be called “magic farts” that sparkle and introduce new elements in the show. In the Korean version of Crayon Shinchan, the trouble-making main character Jongu regularly drops his pants and moons unfortunate gazers.

Kids were always doodling in-between classes at our school, and no matter what the subject of their art, there was a butt and/or a coil of poo integrated into the design. Apparently, the proprietor of a convenience store we frequented felt so much pride in the artwork of his child that he felt the need to hang this piece of work up prominently on the wall of his store:

Poo galore. And there are no boundaries! When my friend Paul ordered a tiramisu at a cafe, this is what he received:

But the king of all butt jokes in Korea is the dreaded dung chim. Literally translated “dung needle”, the dung chim is performed by holding one’s index fingers together, coming up behind the unsuspecting receiver, and stabbing the receiver in his bottom.

Here’s what makes the dung chim the prank of all pranks: although it can be performed on one’s peer, its target is almost always a male adult. So if you’re a male teacher, that pretty much means that, yeah, at some point or another, a student is going to stab you in the rear, laugh, and think there’s absolutely nothing wrong with it. All the while, you are going to be thinking one if not all of three things:

2. What universe am I inhabiting in which small children poke me in my rear and don’t run right away and instead hang around for my reaction?

3. Am I going to get deported for this? 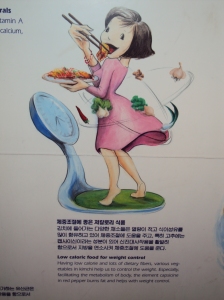 Something magical is going on under there.

As a foreigner, you’re going to be even more shocked when you notify your Korean co-teacher of said incident, hoping to get some advice on how to deal with the miscreant; nine times out of ten, your co-teacher will laugh and see no problem in the assault. Eventually, you’ll realize that getting dung chim’d is a rite of passage for almost all male (and sometimes female) kindergarten and elementary school teachers in Korea and the trauma will begin to subside. You finally have your own war story to tell when out with fellow teachers and the conversation inevitably turns to this strange habit.

And yeah, for a second, you will feel jealous of these over-worked, under-played, adorable little kids. Why? Because they get to grow up in a culture where stabbing their teachers/dads/uncles/authority figures in the bottom is somehow acceptable and chalked up to innocent impishness. You realize that it would’ve been pretty sweet to have had dung chim in your arsenal of trickery as a youngster yourself.

I want to take a moment and congratulate Miss Demure Restraint on being Freshly Pressed! She has been a supporter of my blog from almost the beginning and has always left kind and constructive comments that I value a lot. Her blog always makes me laugh and think (a nice little pair!) If you haven’t already, check out her post that got her some attention. Congrats, Miss D!

← Surety
Getting It Down →