Have you ever had an idea that you know has potential but you don’t want to execute it yourself because the last time you did that, you ended up with burnt English muffins when all you wanted was a mini pizza? I was thinking about stupid wine tasting terms the other day as I looked at my gut and realized that it was as flabby as a $2 bottle of ice wine. My mind immediately went to my friend the Liquorstore Bear, who I knew could give the topic of bizarre wine tasting terms a far better sendoff than I ever could. So here he is: the one, the only, Liquorstore Bear.

My friend Scarybear knows we’ve ordered pizza before the delivery guy even rings the bell. What’s more, he can tell which toppings we’ve ordered and which pizzeria.

Okay, so you don’t know who the hell Scarybear is. But bear with me. 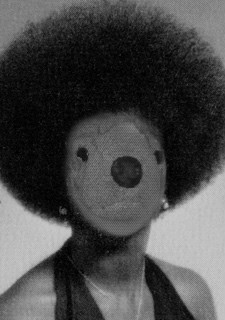 Many thanks to Emily for allowing me to do a guest post. My friend Scarybear will be delighted that this pic is circulating to yet more readers.

When you think of bears you probably think of lumbering, garbage-raiding pests who regularly take a tranq dart for encroaching on campers. Bears (I happen to be one) are famous for being nuisances, but they can’t help it. They have the most awesome noses in the animal kingdom.

It was the ursine nose that enslaved me to wine, but human noses aren’t too shabby (they’re at least a two-thousandth as acute as bear noses). You need to have that olfactory bulb on board to really enjoy wine, and it’s probably better just to smell the wine in the room, not the empties that have already been brought out to the garage, right? Meaning, you humans are probably in the olfactory sweet spot for wine enjoyment, whereas wine’s amazing aromas will eventually drive me mad. 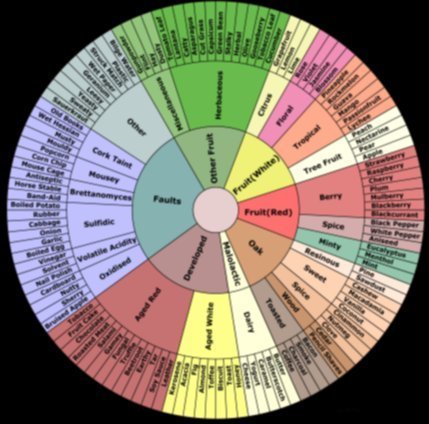 You’re familiar with the welcome wine aromas: oak, tannin, tobacco, leather, spice, berries, orchard fruit, tropical fruit…etc. But when you buy wine within the LBHQ budget (which is to say, a small budget aiming for max wine), you encounter all sorts of unexpected aromas too…

Fair to say, a wine can smell like anything, depending on the (in)competence of the winemaker. 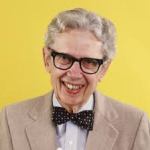 If you think Orville Redenbacher bottled your vino, you’re not imagining something’s off. Excess diacetyl, formed early on when the yeasts are first converting grape sugar into alcohol, produces that fake butter odor. A little butter isn’t unwelcome in a Chardonnay, but you shouldn’t feel like you’re in a movie theater.

One of our local wine consultant’s eyes lit up as she described the slight barnyard notes in a Carmenere. She’s not alone; plenty of wine drinkers adore manure aromas; others (correctly?) think they smell like ass. They indicate the presence of Brettanomyces, a yeast capable of wrecking a wine but acceptable in tiny amounts. (Not to bears with kick-ass noses though!)

Skunky beer has its adherents, but skunk in a wine indicates an excess of sulfur, used in winemaking to inhibit bacteria. Especially in low-nitrogen wines, sulfuric chords assert themselves rudely—rotten eggs, snuffed matches, Scarybear’s farts—making wine undrinkable for all except the most determined alcoholic bears. Riesling and Chardonnay most often fall prey to skunkiness.

Damp cardboard is a surefire sign that a wine is corked. There is some debate as to what exactly causes cork taint (2-4-6-trichloranisole)—fungus, contact between corks and cardboard packing material, chlorine used to wash the cork, although this practice was discontinued in the 90s. Throw that wine down the sink (unless it will leave you without wine) and get a clean glass for your next bottle; the odor is persistent. And don’t be embarrassed to embrace the screw-top. 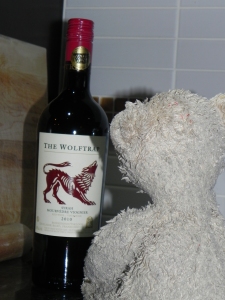 Not asparagus pee, per se, but soggy asparagus itself, this odor may emanate from Sauvignon Blanc and is the result of vinifying underripe grapes. Vegetal odors are all wrong, if you ask me, just like vegetables are all wrong.

This smell may accompany a brick-red hue (for reds) or a tawny shade (for whites). It signifies oxidation. Some dumbass stored or transported the wine improperly and exposed it to air or high temperatures.

Another reason to toss the wine (or take it back to the store if you can), this screeching high note does not belong. It’s a kind of bacterial spoilage known as volatile acidity (VA).

One of the most interesting and even sought-after aromas, feline urine occurs most often in Cabernet Sauvignon and Sauvignon Blanc. The responsible compound, p-mentha-8-thiol-3-one, smells like kitty tinkle only in a specific concentration range, below which it smells herbal and above which it smells like blackcurrants. Wow! Basically you want to attack this wine right away or let it sit for a day so you can bypass the pee phase. Unless you like pee.

Which smells have you encountered with wine?