Wherein I stare down the enemy of sleep

You may remember that back when I was preggo, I was kind of obsessed with the creation of our baby registry, mostly because I had no idea what we actually needed and I didn’t want to look like a fool to my friends and family when they saw the ridiculously unnecessary things I had registered for. More importantly, I didn’t want to get stuck with a bunch of contraptions that we wouldn’t need or the baby would end up hating.

Not breaking with any trends in my life in general, I ended up looking like a fool anyway. Yeah, uh, turns out one does not need a high-priced baby food maker right away if one already possesses a food processor. And boobs. Who knew? When I mentioned that I really had no idea what I was doing when I went bananas on the Target website, my friend Meagan looked me dead in the eye and said, “Yeah, I could tell.”

So, when Miss C arrived, we of course didn’t have nearly enough diapers to cover us for a five-hour period, but we did have a proliferation of sleeping devices, which is ironic because at first it seemed like sleeping was the last thing on her mind. 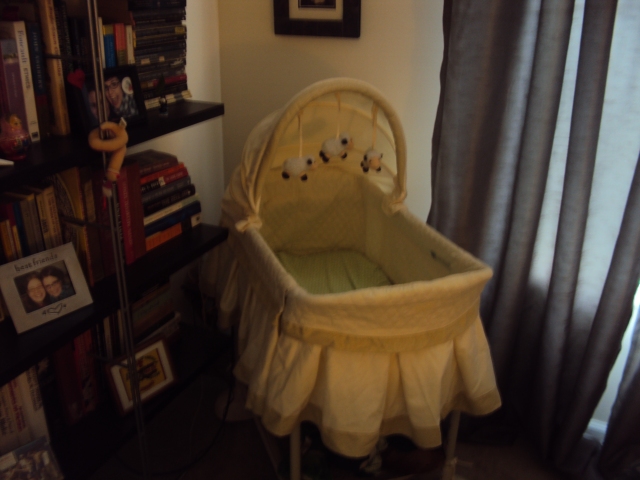 But possibly the best:

Luckily, a couple of them have not been totally snubbed by Miss C. Most notably is her father, and for this I’m grateful because she’s really stuck with him for life. She likes the bunny swing, and that’s where she spends most of her down time. She rests/chills in the pink portable playtime bassinet when I’m showering or cooking. As for the crib, we’re not quite there yet. We have had nothing but trouble with the bassinet in our bedroom, which bums me out because it’s so darn cute*. But each time we try to put her down in it, she is up and annoyed within 20 minutes. So now it’s just a prop in our lives.

*Cuteness is now an actual credible factor in my life now. This would have made me throw up in my mouth a little prior to and during my pregnancy, but now it’s just another instance of me eating my words. Yum, yum. Chowing down.

As for the Pack N’ Play, we’ve only been utilizing it for its “play” function as of yet, but once we hit the road for Florida and elsewhere this summer, we will get more mileage out of it. Geez, I’m sorry. The puns are multiplying. I blame my lactation tea.

Then there’s the whole grown-up bed thing. Occasionally I will nurse her in bed. Lately co-sleeping is something I’ve been thinking about (yet not really doing) because it’s a fact of early babyhood that at times they simply don’t want to be put down. They will be all snuggled up in your arms or on your stomach, resting completely soundly*, and then when they are put down in any one of their sleeping contraptions, they know immediately and start to wail. So you start over and get them in a happy, sleepy place and attempt to put them down again. Wailing commences. This little dance repeats several times and can last for several hours until you’re like, “SERIOUSLY?”

*And yes, you’re sure of it because their breathing is rhythmic, their arms are limp, their diaper is clean as a whistle, and their little stomachs are fully sated. They’re out, beyond a doubt.

Co-sleeping – the kind where she’s not just in the same room with you but in actual contact with you – is one of those things that you are warned against about a trillion and a half times when you’re preggo and when you have an infant nowadays, and I get why. If it’s not done properly it can be extremely dangerous. That’s why I think the Back to Bed campaign is an entirely wonderful thing. It encourages parents and caregivers to take extremely seriously the sleep habits of their babies, and it’s helped to reduce the occurrences of SIDS.

Sleep deprivation is used as a torture device for a reason. It’s not fun. It sucks. A few weeks back when we were in the thick of it, I was sleeping and B was up with the baby. I had pumped and he was trying to get the milk in a bottle to feed her. He was having trouble getting the gasket and the nipple to fit the bottle while she screamed at the top of her little baby lungs for it. He called me in to help, and when I couldn’t get the gasket to fit either I took it and hurtled it across the room. That’s the product of sleep deprivation.

When it’s 4AM and the baby won’t sleep unless she is literally touching you and you are operating on a cumulative eight hours of sleep for the past three days, co-sleeping begins to sound like a not-so-bad idea. Even if you have acquired a good amount of rest, there is also the intimacy factor of having your baby snuggled against you. Admittedly, the idea of having your baby with you at all times is definitely not for everyone, but I would argue with people who say that it’s insane and unbalanced to want to have that much physical contact with your baby. Sure, some people want/need their grown-up time, but some others just don’t. If everybody looked the same we’d get tired of looking at each other and whatnot.

Recently, some other bloggers who I highly admire, trust, and am 100% sure are not coo-coo have left comments and emailed me with their stories in full-contact co-sleeping and how they have navigated it. Their stories have made me a lot more understanding (and I mean, A LOT because I was a total hater prior to them) of the practice of co-sleeping and under what conditions they did/ are doing it safely. I’m still not sure if it’s right for me and my family, but I am certainly much more understanding of it.

This post is troll bait if I ever saw it, and I’m sure there will be someone out there that reads it and decides to notify me of how dangerous sleeping with your baby can be. To them I say, “I KNOW.” I am no expert on the subject and I’m not making any claims or suggestions about what I or others should do. I suppose the main reason for me writing this is to illustrate how parenthood opens you up to a lot of things that you never thought you would consider, and that just like anything used wisely, co-sleeping may be something that when practiced safely and properly can be a good thing that makes life more enjoyable.

I will, however, stand by my statements to proceed with caution when compiling a baby registry.

I am refraining from posting a pic of Kendra and me when we were thirteen because I value our relationship and I know she'd kill me if I publicized our prior awkwardness.

On an entirely different note, I would like to welcome my real-life friend Kendra to the WordPress blogging community! Kendra and I have been pals since we met in computer club in the third grade, so now that we’re both blogging here I guess you could say the high-tech aspect of our relationship has finally reached its pentacle. Her blog is called Over the Spoon and she will be chronicling her love affair with food. Having tried many of her delicious concoctions and eaten at fantastic restaurants she recommended, I would say food loves her back.

← The Other Side: Notes on the First Month
Colors →